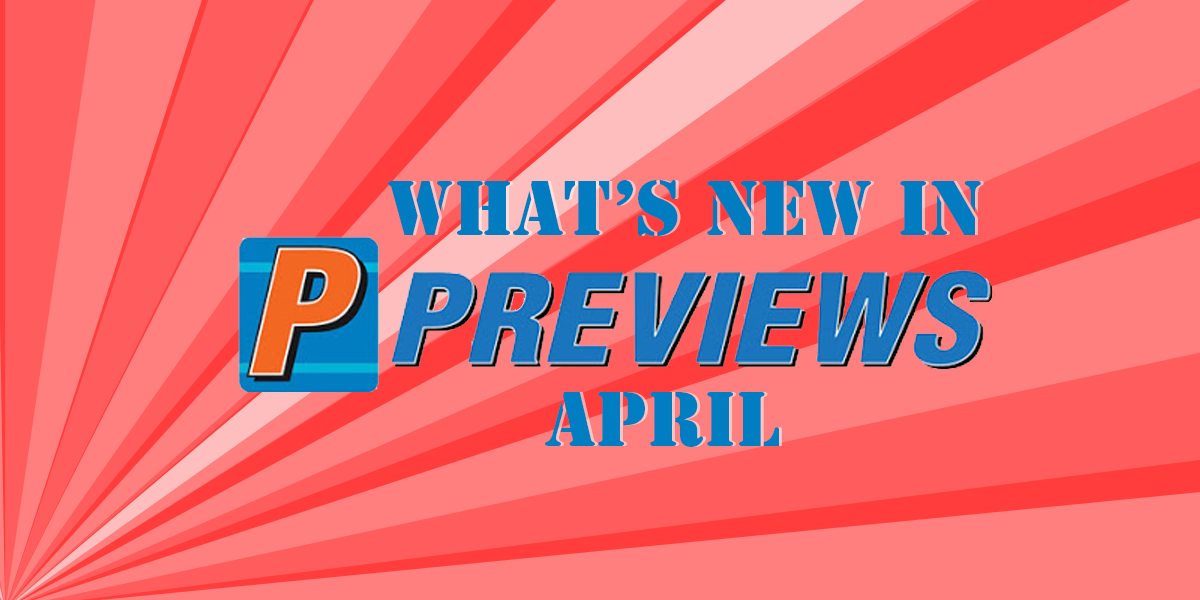 Below is a Sample of the exciting new items available for order in April  Items will ship in June and beyond.

As the Warworld Saga reaches a breaking point, battle lines are drawn between the two towering forces at odds: Mongul and Superman. In this special 2022 annual we’ll explore how our combatants have evolved over the years to represent the beacons of hope and tyranny that they respectively embody…and witness the first chilling chapter of their ultimate final battle!

There is no forgiveness for Black Adam. This is the reality Teth-Adam, immortal man of indomitable will, must face when he discovers he has been infected with an incurable plague destroying his immortality. Haunted by the specter of centuries of dark deeds, Black Adam transfers his powers to a worthy successor who will redeem Adam’s legacy and defend their ancestral homeland of Kahndaq, only to subsequently become mystically handcuffed to him when Adam’s plague is arrested, giving birth to perhaps the most volatile and dysfunctional super-team in DC history! Powered by stunning art by Rafa Sandoval (Justice League) and breathtaking painted covers by Irvin Rodriguez (Detective Comics), writer Christopher Priest (Deathstroke, Justice League) brings his trademark wit and skill for character deconstruction to an entirely fresh examination of the man you love to hate! Get ready to ride the lightning!

Crisis on Infinite Earths. Infinite Crisis. Final Crisis. And now…Dark Crisis! The epic event years in the making is finally here! Superman, Batman, Wonder Woman, and the rest of the Justice League are dead. The remaining heroes are left to protect the world from an onslaught of violent attacks by DC’s greatest villains! Can the legacy heroes step out of the shadows of the classic heroes to form a new Justice League? And will that be enough to stop a darkness greater than anything they’ve ever faced from destroying everything? Don’t miss out on the first issue of the blockbuster event of the summer!

Kara Zor-El can no longer find any meaning or purpose in her life. But all that changes when an alien girl seeks her out to help her take revenge on the bad guys who destroyed her world. Now a Kryptonian, a dog, and an angry, heartbroken child head into space on a journey that will shake them to their very core. It’s Supergirl like you’ve never seen her before in a character-defining sci-fi/fantasy masterpiece! Collects the entire miniseries Supergirl: Woman of Tomorrow #1-8.

Flash back to the early days of Hank Pym’s career as the astonishing Ant-Man! It’s date night for Hank and his girlfriend Janet Van Dyne, but nobody told that to Ant-Man’s enemies! Watch as Hank’s ant-agonists band together to finally take down the scientific adventurer! But will anyone come to his rescue? And who is the mysterious stranger who stalks him? Join Al Ewing (IMMORTAL HULK) and Tom Reilly (THE THING) as they explore the history of every hero (past, present and future!) called Ant-Man!

The Iron Cat armor made its first appearance in BLACK CAT #11 but both Black Cat and Iron Man thought that was the last they would see of it. If Felicia is surprised to see the armor again, you can imagine how furious Tony is. There’s someone new in the Iron Cat armor and they have a plan that will put them in the crosshairs of all the heroes of the Marvel Universe. Both Iron Man and Black Cat’s secrets and mistakes are going to come back to haunt them and it’s going to get ROUGH! Don’t miss this fantastic new miniseries!

Hot off a GLAAD Award nomination for 2021’s anthology, MARVEL’S VOICES: PRIDE returns for a jam-packed celebration of LGBTQI+ characters and creators! New York Times-bestselling, multi-award-winning author Charlie Jane Anders introduces a new hero to the Marvel Universe – and it won’t be the last you see of them. Get in on the ground floor here! IRON MAN scribe and lauded TV showrunner Christopher Cantwell takes on Moondragon’s complex legacy for a heart-bending story across space and time. Shuster and Eisner-winning writer Andrew Wheeler makes his Marvel debut with the MU’s real god of love – Hercules! Nebula, World Fantasy, and Locus-award winner Alyssa Wong reunites the Young Avengers in a story guaranteed to please fans new and old! And that’s just the first slice of the rainbow. MARVEL’S VOICES continues its groundbreaking anthology series with another swoon-worthy glimpse of the world outside your window!

This is what the Watcher has been watching for. A danger older than the planet threatens everything. The age of technology is about to end – and for once, the heroes who have saved Earth time and again find themselves almost completely powerless in the face of it. X-Men and Avengers will assemble. Spider-people and the Fantastic Four will come together. Heroes for Hire will fight alongside Champions. But none of it will be enough. The lights are about to go out. The world outside our window…is about to end. And after darkness comes Apocalypse! Nothing can prepare you for an all-new saga of the Marvel Universe as you’ve never seen it before – from acclaimed talents Tom Taylor and Iban Coello! Collecting DARK AGES #1-6 and material from FREE COMIC BOOK DAY 2020 (X-MEN/DARK AGES).

Syd Dallas is responsible for pop culture’s greatest hero: THE DOMAIN! But his sons Miles and David have a complicated relationship with both the creation and their creator. Can they convince their dad to fight for their family’s legacy?

When a Viking prince finds the Eye of Odin, he must return it to its rightful owner or face a death of boils and decay. By his side are a one-armed warrior past his prime and a female warrior convinced she’s a Valkyrie. Monstrous mayhem ensues.

Acclaimed author Tillie Walden enters the world of Robert Kirkman’s THE WALKING DEAD as 17-year-old Clementine must learn the difference between living and surviving in this intimate, coming-of-age YA graphic novel trilogy.

FROM THE WORLD OF ROBERT KIRKMAN’S THE WALKING DEAD…
…CLEMENTINE LIVES!

Clementine is back on the road, looking to put her traumatic past behind her and forge new path all her own.

But when she comes across an Amish teenager named Amos with his head in the clouds, the unlikely pair journeys North to an abandoned ski resort in Vermont, where they meet up with a small group of teenagers attempting to build a new, walker-free settlement.

As friendship, rivalry, and romance begin to blossom amongst the group, the harsh winter soon reveals that the biggest threat to their survival…might be each other.

A coming-of-age tale of survival written and illustrated by two-time Eisner award winner Tillie Walden (Spinning, On a Sunbeam).

When an introverted tech geek accidentally discovers mind control, he and his friends do something unexpected – they put the science into an app to help users break their technology addiction. But as their Mindset app achieves a dangerous cult following, lies, conspiracies, and murder come to light. Are they helping people or controlling them?

A Diamond Select Toys release! He cannot be stopped! The Immortal Hulk is now the newest Gallery Diorama from Diamond Select Toys! Depicting the horrifically powerful hero in full charge, based on his most recent comic book appearances, this approximately 11.5-inch PVC diorama comes packaged in a full-color window box. Designed by Caesar, sculpted by Alterton!

With only a few trusted allies amongst the city’s corrupt network of officials and high-profile figures, the lone vigilante has established himself as the sole embodiment of vengeance amongst his fellow citizens. The Caped Crusader in wingsuit soars above Gotham City and be on the lookout for his greatest adversaries.

With the release of The Batman movie, Sideshow and Hot Toys are excited to introduce the Batman (Deluxe Version) Sixth Scale Collectible Figure, which comes with wingsuit and accessories for integrated set-up.

In addition, the Deluxe Version will exclusively share a few more accessories for sophisticated collectors including the wingsuit, sticky bomb gun with insertable bullet, LED light-up staircase and building décor as diorama accessories, and also includes a character backdrop.

For More Cool Stuff Check Out The April Previews Catalog,