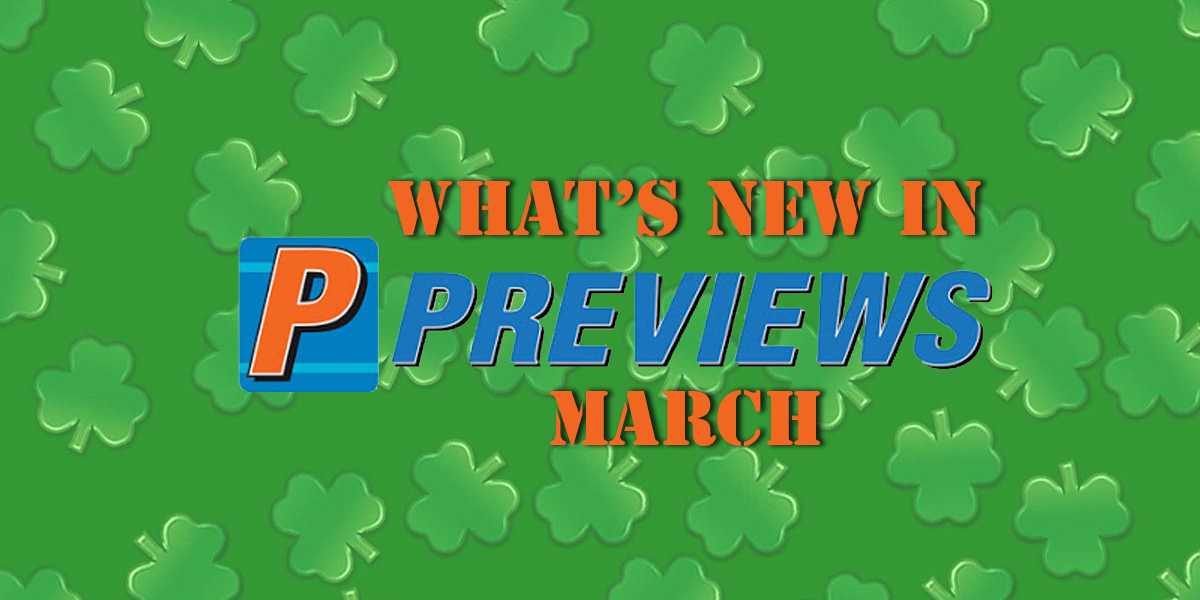 Below is a Sample of the exciting new items available for order in March Items will ship in May and beyond.

Joining the Justice League is a goal for any superhero, but what happens when a quest for membership takes a sinister turn? Join Starman, Metamorpho, and Warlord as they look to prove themselves worthy by summoning and defeating Darkseid in battle. Soon they’ll learn that calling upon a New God never ends well, and their world is headed for a crisis as a result! The journey to save the day will be a treacherous one filled with princesses, knights, and all kinds of monsters. Each person the heroes encounter plays a crucial role in this sprawling yet gripping narrative that is a little bit silly, a whole lot dark, and completely cool. Expect the unexpected with a supporting cast featuring Manhunter, Lady Cop, the Green Team, and the Creeper! Inspired by the heroes and villains of 1st Issue Special, Tom King and Jorge Fornes (Rorschach) return for an unforgettable maxiseries that reimagines the characters and their stories. A multicharacter, multilayered crime drama starring some of DC’s most obscure creations: no one will see it coming, but everyone will want to see where it goes!

DC VS VAMPIRES HUNTERS #1 (ONE SHOT) CVR A JONBOY

A blood-soaked one-shot tale of vampire violence! The Son of Batman, after years of training to be an assassin, is on a path toward utter destruction of the vampire race… Enter Damian Wayne: vampire hunter!

When Milestone returned, Reginald Hudlin and Denys Cowan weren’t planning to stop there! Now they wel-come you to a whole new realm of original characters, extending far beyond Dakota…welcome to Earth-M! Nanotech engineers Dr. Kelly Vu and Dr. David Kim are committed to only one thing more than each other: using their regenerative nanobots to save the world. And following a violent attack, those very same nanobots end up saving David and Kelly’s lives…sort of. Their salvation comes with an unexpected consequence: husband and wife awaken to realize that they now share one super-powered body! Writer Greg Pak (Action Comics, Batman/Superman) and artist Khoi Pham (Teen Titans) team up to introduce two thrilling new superheroes in the body of one, with the power of billions of nanobots. But how close is too close, with the love of your life literally in your head? And what happens when a couple so closely bound dis-covers they have very different ideas about how their newfound powers should be used?

With the power of the gods stripped from him, Teth-Adam is on a quest to find both the magical word that will restore him as Black Adam and the one thing that always kept his heart from turning completely black with rage: his deceased wife, Isis! Collects the full six-issue miniseries.

CAPTAIN AMERICA SOARS AGAIN! Sam Wilson picks up the shield once more – and enters a world of trouble! Following a lead from Misty Knight, Sam intercepts a mysterious group hijacking what appears to be an empty train. As he digs deeper, he discovers that the plot may be connected to a crucial piece of Captain America history…and, surprisingly, Wakanda. The world is ready for two Captain Americas – but is Sam Wilson ready for what comes next? Acclaimed writer Tochi Onyebuchi (BLACK PANTHER LEGENDS, Riot Baby) teams with Stormbreaker R.B. Silva (POWERS OF X, INFERNO, FANTASTIC FOUR) to open a thrilling new chapter of CAPTAIN AMERICA history!

All-NEW ADVENTURES OF THE LEGENDARY THIEF BY CO-CREATOR CHRIS CLAREMONT! You think you know all there is to know about Remy LeBeau, the Ragin’ Cajun, the mutant known as GAMBIT – but legendary X-scribe Chris Claremont has an ace up his sleeve with this new series! Before he joined the X-MEN, Gambit encountered a mysterious girl named ‘RO – the mutant STORM regressed to her child self by the nefarious NANNY – and the two went up against the forces of the SHADOW KING! Now, revealed for the first time, Gambit finds his path to becoming the heroic X-Man millions of fans call their favorite! Joined by rising star artist Sid Kotian, Chris weaves a story of action, intrigue and revenge that made Gambit the mutant he is and forged his relationship with Storm. You’ll get a charge out of this one, mon ami!

The story that began with WAR OF THE BOUNTY HUNTERS continues! It’s the second chapter of an epic saga that will reshape the Star Wars galaxy during the Age of Rebellion! The criminal organization known as the Crimson Dawn has risen – but what is their goal, and how do they plan to achieve it? As Lady Qi’ra sends two killers – the relentless, Force-blinded Ochi of Bestoon and the mysterious, unstoppable Deathstick – to do what they do best, how will the Rebel Alliance and the Empire react to this new galactic power player? Featuring the return of beloved characters, shocking twists, epic feats of the Force and a story that will reach from the darkest underworld all the way to the Imperial Palace on Coruscant, CRIMSON REIGN is a Star Wars saga like no other! Collecting STAR WARS: CRIMSON REIGN #1-5.

FOR FANS OF GIDEON FALLS AND HOME SICK PILOTS!

After inheriting a farm house, Trudy and Gabby are ready to start the next chapter of their lives together…except it’s already home to a mysterious force that’s attracted ghosts, aliens, and all kinds of supernatural beings for decades.

Now, Gabby and Trudy must play by the “house rules” in order to survive living among the most frightening creatures on Earth in this new series from KYLE STARKS (ASSASSIN NATION, THE SIX SIDEKICKS OF TRIGGER KEATON) and ARTYOM TOPILIN (ICE CREAM MAN PRESENTS: QUARANTINE COMIX SPECIAL).

When one of the vilest creatures ever imprisoned in Hell is released back onto Earth, Spawn follows the clues right into a trap set just for him. But why does Kincaid want Spawn to ascend the throne of Hell, and what of the prophecy of the KING SPAWN? Collects KING SPAWN #1-6.

Go deeper into the Dune universe with this lore-expanding story set during the events of the Frank Herbert classic!

In the aftermath of the battle of Arrakeen, legendary House Atreides warmaster Gurney Halleck takes refuge with spice smugglers, vowing revenge against the Harkonnens no matter the cost.

Artist Francesco Mortarino (Power Rangers) brings the story by original authors Brian Herbert & Kevin J. Anderson to life in ways that will excite both fans of the novels and the recent hit film alike!

From Beast Kingdom. The mutated character in DC’s multiverse, The Batman Who Laughs, combines the manic craziness of the Joker with the brute force of Batman. Praised by fans for his unique personality and looks, the Death Metal character has become a legend in its own right and one that nightmares are made of!  Beast Kingdom presents the DAH-063 Death Metal: The Batman Who Laughs, a figure representing a character of fear and madness! Standing at 7 3/4″ in height and with over 26 points of articulation, the figure brings to life the crazed, wide mouthed face with 2 replaceable head sculpts. The Death Metal-inspired clothing is represented in all its glory using real cloth for the suit. The signature wings and long handled sickle are also included for fans to enjoy.

“I made a vow to have peace, no matter how many people I have to kill to get it.” – Peacemaker

Picking up where 2021’s The Suicide Squad left off, DC’s recently released series Peacemaker follows a violent vigilante who believes in achieving peace at any cost – no matter how many people he has to kill for it in the process. He was one of the members of the second Task Force X strike team sent on a mission to Coro Maltese.

In response to the immense fame of the character, Sideshow and Hot Toys are pleased to officially introduce the highly-anticipated Peacemaker Sixth Scale Collectible Figure with shiny silver chrome helmets from the Peacemaker collection.

Sophisticatedly crafted with striking likeness of Peacemaker’s appearance portrayed by John Cena in the action series, the 1/6th scale figure features a newly developed helmet head and an interchangeable helmet covered in silver chrome finish with details, an attachable tongue to create alternate expressions, a specially tailored outfit, weapons including a sword, an axe, and a figure stand. The sidekick of the show – Eagly will also come as a sixth sixth scale accessory with spread wings for a complete collector experience.

Be sure to pick up the fantastic Peacemaker Sixth Scale Collectible Figure now to add to your proud DC collection!

For More Cool Stuff Check Out The March Previews Catalog,