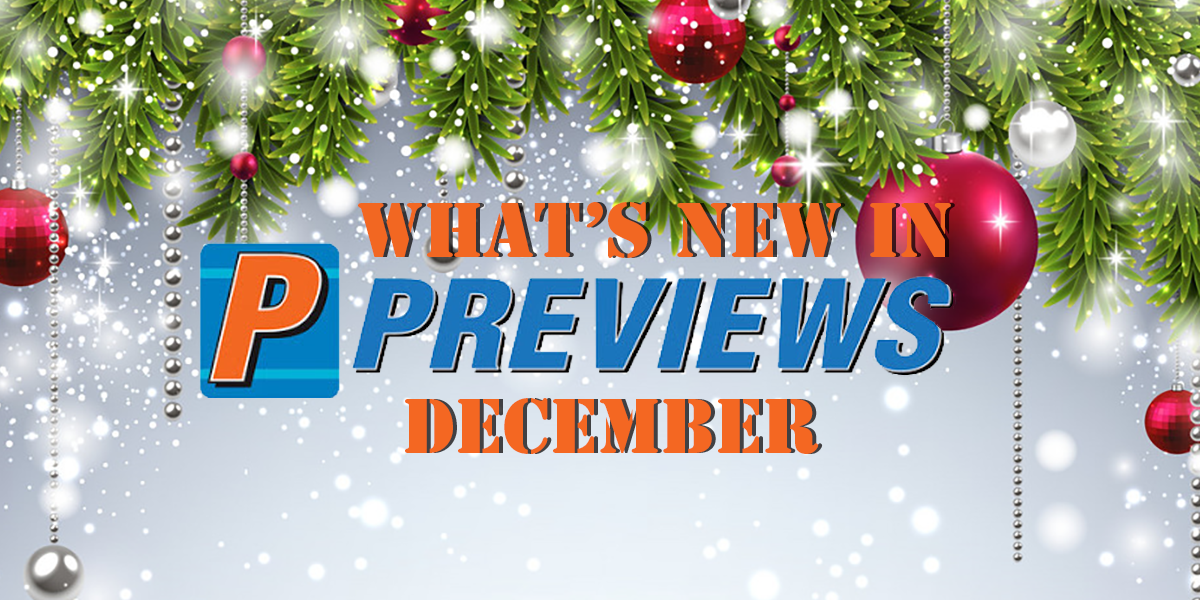 Below is a Sample of the exciting new items available for order in December. Items will ship in February and beyond.

Introducing the newest hero in the DCU, the great sage, equal to the heavens, better than his predecessor the legendary Monkey King, even better than the Justice League—and definitely the Teen Titans—(actually, all the heroes combined), everyone put your hands together for…the Monkey Prince! Marcus Sun moves around a lot because his adoptive parents are freelance henchpeople, so this month he finds himself as the new kid at Gotham City High School, where a mysterious man with pig features asks Marcus to walk through a water curtain to reveal himself as who Marcus really is…someone who has adventured through The Journey to the West, can transform into 72 different formations, can clone himself using his hairs, and is called…the Monkey Prince!

Dive deeper following the thrilling conclusions of Aquaman: The Becoming and Black Manta! When a terrorist in Middle America is revealed as an Atlantean sleeper agent seemingly gone rogue, the Aquamen—Arthur Curry and Jackson Hyde—are on the case. But it soon becomes clear that the tragedy was not just a single bad actor, but the beginnings of a much larger and more dangerous chain reaction…and the heart of an explosive Atlantean conspiracy! If Arthur’s not careful, the secrets he’s keeping—from Mera, Tula, Tempest, Atlantis, the surface, and even Jackson—could cause a rift from which the Aquamen might never recover!

Offered again! From the pages of Newbery Medal-winner Neil Gaiman’s The Sandman comes fan-favorite character Death in a deluxe hardcover edition collecting her solo adventures! This volume features Death: The High Cost of Living and Death: The Time of Your Life, plus all of her other key appearances throughout the Sandman Universe.

A KILLER CELEBRATION! Cletus Kasady is the most notorious serial killer in the Marvel Universe – and it’s been thirty years since his first introduction! Thirty years of monsters, mayhem and murder – AND YOU HAVEN’T SEEN ANYTHING YET! With an awesome assembly of creators, this issue will HAVE IT ALL! A look back on Carnage’s past, his present and, just maybe, the first hints you’ll ever get of his visceral and violent FUTURE!

Thanos is now ruler of the Eternals! But believe it or not…he’s actually not the worst leader that the Eternals’ society has ever seen. No, that honor belongs to someone even more horrific. Thanos is evil, yes, but who was the original evil from whom all Eternal evils descend? Meet Uranos, the Undying. And may the Celestials have mercy on your souls.

Marvel Boy is back in Kate Bishop’s life, and his timing couldn’t be worse! Will his arrival throw a wrench into Kate’s less-than-well-oiled team of West Coast Avengers? Probably! Meanwhile, something foul is afoot in the City of Angels, courtesy of the newly formed Masters of Evil West Coast! Kate and your other favorite Hawkeye must lead the fight to save the “chosen one” – America Chavez! Then, with Earth under siege, Kate joins new allies – Miles “Spider-Man” Morales, Wonder Man, Balder the Brave, Sebastian Druid and Death Locket – for a journey into mystery through the War of the Realms! But can they save Earth’s only hope: Thor’s kid sister?! Prepare to suffer the slings and arrows of a truly legendary adventure in babysitting! Collecting WEST COAST AVENGERS (2018) #5-10 and WAR OF THE REALMS: JOURNEY INTO MYSTERY #1-5.

Yesterday: New Orleans’ greatest hero, ROGUE SUN, was murdered.
Today: rebellious teenager DYLAN SIEGEL discovers that Rogue Sun was his estranged father, Marcus-and that he’s inherited his father’s mantle. Tasked with protecting our world from the forces of the supernatural-and solving his father’s murder-Dylan will be forced to come to terms with the man he’s spent the majority of his life hating.

Nigerian brothers SHOBO and SHOF present NEW MASTERS, a groundbreaking blend of science fiction, adventure, drama, and vibrant Afrofuturism. In a striking vision of West Africa under the thumb of alien colonizers, a motley crew of outcasts find themselves caught up in a power struggle for control of an ancient artifact with immense power.

When black market coder Aurora Yi uncovers top secret data that has tapped into the past lives of the citizens of Mazu Bay, her world is turned upside down. The mega corporation Synastry Designs wants its data back and is hot on her trail. Aurora has no choice but to turn to the Fox and the Hare, the most feared mercenaries in the city, for protection.

It’s a bright sunny day near the Santa Monica Pier. You’re reading an excellent horror novel (the latest Sutter Cane!) and enjoying some downtime. But suddenly… you’re compelled to stand up. So is everyone else around you. And now you’re walking along with them into the ocean. Stop! you want to scream. Body, please – just stop! But your body refuses to listen. Not even when the waves crash over your head, and the water fills your lungs…

“Hello. Which one of us are you?” – President Loki

How many Loki is too many Loki? In Episode 5 of Marvel Studios’ Loki, fans are introduced to a new bunch of Loki variants! Perhaps the most arrogant and pompous Loki – President Loki – shows up and expects to take over the control of the realm until his own army turns on him.

Exquisitely crafted based on the screen appearance of Tom Hiddleston as President Loki in the series, the figure features a newly developed head sculpt and his horned helmet with delicate craftsmanship, election campaign pin on the suit applied with weathering effects perfectly translating the details; a pair of daggers, greatly detailed accessories such as Alligator Loki in one-sixth scale, a cane, a specially designed character backdrop with lenticular effect, and a themed figure stand.

Reserve space for the President Loki figure among your glorious collection today!

Maggie has experienced soul-crushing heartbreak. Despite having lost just about everybody she has ever cared for, Maggie has always managed to pick herself back up. But this time is different – the monster who took her husband is still out there. While her thirst for revenge propels her, Maggie finds herself in a position of leadership at the Hilltop, a humble community prepared to follow her into war and help secure a brighter future for themselves and her unborn child.

For More Cool Stuff Check Out The December Previews Catalog,