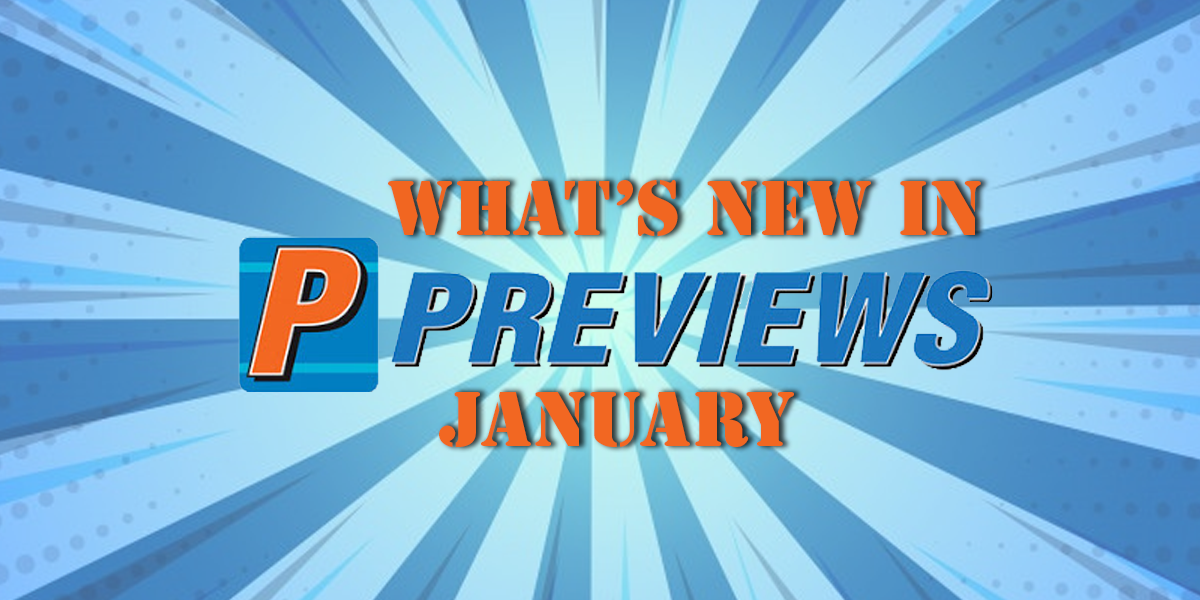 Below is a Sample of the exciting new items available for order in January. Items will ship in March and beyond.

Written by Rex Ogle, Rich Douek, Collin Kelly, Jackson Lanzing, Ram V, Stephanie Phillips, Devin Grayson, and others Art by Geraldo Borges, Christian Duce, Phil Hester, Ande Parks, Jon Sommariva, Roger Robinson, and others Ahhhh! Can you smell that? Love is in the air again, and we’re here to warm your heart and brighten your soul with eight timeless tales of…weird love? Sorry, hold on, I just need to read that again. Yup, that says weird love. Well, all right. Looks like we’ve got stories of a love as old as Jurassic time on Dinosaur Island, a bromance between Peacemaker and his eagle sidekick Eagly, and a first date you never saw coming. Oh wow, these really do sound sweet and heartwarming! So c’mon, let your freak flag fly and get weird this Valentine’s Day with us for Weird Love Tales #1!

Three villains, one Dark Knight, and a deadly heist gone wrong. Catwoman, the Riddler, and the Penguin join forces to pull off the greatest robbery in the history of Gotham City. And their prize? A mysterious and priceless artifact in the secret possession of Bruce Wayne! But, as the events unfold, what fun is a heist without a bloody double cross or two? The blockbuster team of Tom King and David Marquez bring an epic, white-knuckled, action-packed tale of a young Batman desperate to recover his most prized possession from a host of violent rogues before the clock strikes the Killing Time.

NOT ENOUGH GWENS! When Gwen Stacy was bitten by a radioactive spider, she gained arachnid-like super-powers and started a crimefighting career as Spider-Woman (or as she’s affectionately known to her peers, Ghost-Spider)! But what would have happened if instead she had picked up the enchanted hammer, Mjolnir? Or if she received the Super-Soldier Serum? Or built a high-tech suit of armor? Or…you get the idea! Find out in this new five-issue miniseries by Tim Seeley (HEROES REBORN: MARVEL DOUBLE ACTION) and Jodi Nishijima (UNITED STATES OF CAPTAIN AMERICA) as Ghost-Spider tumbles through time and comes face-to-face with herselves!

The Warners are your typical American family. Dad works at Stark Enterprises. Mom works in a senator’s office. The girls are students at Stamford High. The only thing that makes them different is…they’re shape-shifting alien Skrulls who have infiltrated our society to pave the way for invasion! But what could leave them as a house divided? And will the mysterious Man in the Hat be their exterminator – or their salvation? Plus: Meet the Skrulls all over again in the aliens classic first encounter with the Fantastic Four, as well as more momentous events in Skrull history – including the Super Skrull’s debut, the Kree/Skrull War and the final fate of their Throneworld! Collecting MEET THE SKRULLS #1-5, ROAD TO EMPYRE: THE KREE/SKRULL WAR, FANTASTIC FOUR (1961) #2 and #18, AVENGERS (1963) #93, NEW AVENGERS: ILLUMINATI (2007) #1 and material from FANTASTIC FOUR (1961) #257.

ASTRO CITY returns with an all-new special! Who were the Jayhawks? How did they inspire five teen sidekicks looking for answers to hit the road in a rickety crime mobile in 1969? And how will this affect Astro City in the present? This one-shot special features new and existing heroes and launches a mystery that will drive the forthcoming ASTRO CITY series. And don’t miss the ASTRO CITY METROBOOK, collecting the first three years of the acclaimed series!

They are the last children on Earth… who also happen to be vampires. Forlonger than they can remember, these child vampires have lived a life of eternal wonder amongst the ruins of humanity. But shocking events fracture the group and set them on a path of discovery that will shatter their innocence forever.

It’s been a hell of a week for Jerri Bartman. She lost her job, crashed her car, took the only gig available hosting the midnight monster show, and . . . oh yeah-dismembered a zombie. No big deal. Now, to protect the people she loves, she’s going to have to take a crash course in monster hunting. And quickly-a vengeful vampire just booked a first-class flight into town.

*  25 years later, dive into a whole new universe of stories celebrating the phenomenal icon of a generation, Buffy Summers!
*  Where in the Multiverse is Buffy? And what’s happened to the Scooby Gang? Find out in the surprising epilogue to BOOM! Studios’ acclaimed first three years of Buffy the Vampire Slayer!
*  Discover the start of an all new series about the Slayer from Hugo Award-winning author Sarah Gailey (Eat the Rich, Magic for Liars)!
*  Plus, three brand new original stories about your fan favorites from the Buffyverse in this 64 page perfect bound deluxe special celebrating the pivotal anniversary of the Slayer!

The Ringo Award-winning anthology series returns with four tales of Shapeshifters from around the world!

Writer Andre R. Frattino (Simon Says: Nazi Hunter) spins a tale about the Celtic myth of the Children of Lir.

Dain, a nefarious, power-hungry user and Li’s brother-in-law, plots to steal the throne from Lir and his family by turning Lir’s children into swans and ascending the throne himself.

Fionna, the oldest, wants only to gain revenge against Dain, in order to continue her quest to help her father secure his fierce and fearsome legacy as a renowned warrior.

While Fionna attempts to find a way to break the curse, the swan-children are forced to wander near and far for nearly a thousand years. They endure much hardship and sorrow, but face the curse together… finding solace and strength in one another.

The superheroes in Amazon Prime’s “The Boys” are controlled by an evil corporation that is obsessed with money and power. The corrupt “supers” hide behind a semblance of civic duty, that just barely hides their true motivations. The most powerful and insane of all of these supers is Homelander, a god-like being with super-strength, the ability to fly, and who shoots death beams out of his eyes.

This 1:6th scale figure of Homelander features a specially designed custom seamless body developed with TBLeague that is fully articulated and has over 30 points of articulation. The authentic head sculpt includes the exact likeness of Antony Starr as Homelander and was sculpted by renowned figure artist Vimal Kerketta. The serious expression of Homelander features a light-up function to simulate the powerful and awesome death beams.

*Available for separate purchase is a detailed light-up diorama base with a bendable flight arm and “Vought” logo.

Round up The Boys and add Homelander to your collection today!

An assassin and elite mercenary, Fennec Shand has worked for all the top syndicates. Clever, capable, and cunning, she is not to be underestimated and is full of surprises.

In anticipation of the release of the new The Book of Boba Fett live-action series, Sideshow and Hot Toys are excited to present the new Fennec Shand Sixth Scale Collectible Figure!

The Fennec Shand Collectible Figure is going to be an extraordinary companion for your Star Wars collection!

For More Cool Stuff Check Out The January Previews Catalog,