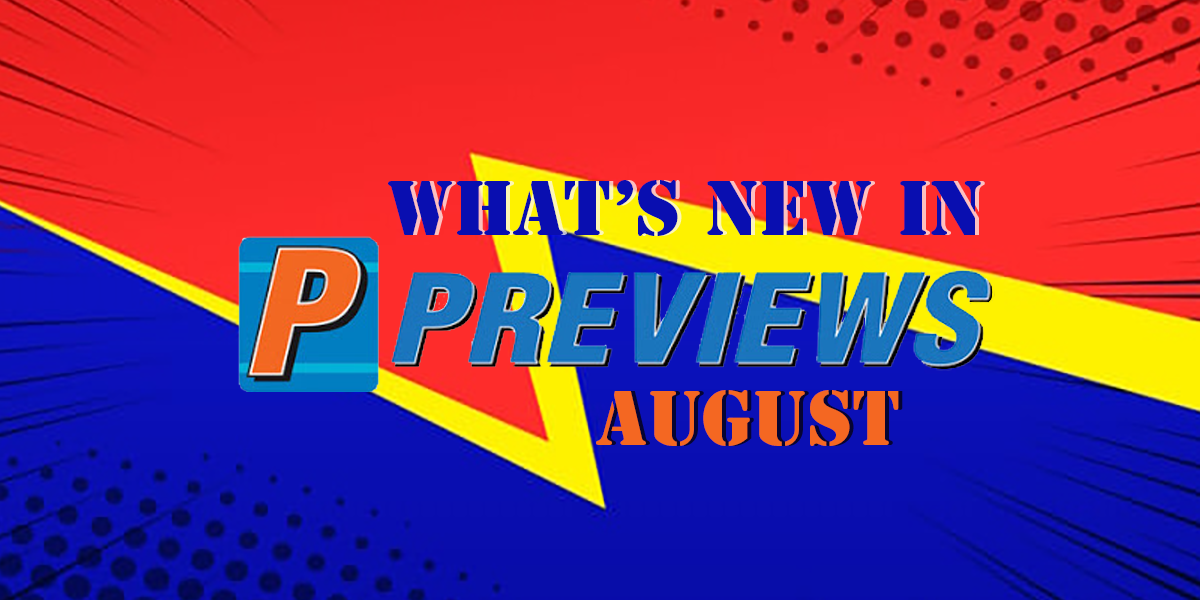 Below is a Sample of the exciting new items available for order in August. Items will ship in October and beyond.

Are You Afraid of Darkseid #1 (one shot)

Story By Elliott Kalan, Collin Kelly, Jackson Lanzing, Jeremy Haun, Kenny Porter, Calvin Kasulke, Terry Blas, Ed Brisson, And More. Pencils And Inks By Max Dunbar, Mike Norton, Jesús Hervás, Chris Mitten, Garry Brown, And More. Gather ’round the fire, fellow campers, because it’s time for that most terrifying of traditions—campfire stories so scary you’ll never sleep without a night-light again! The Teen Titans guide those brave enough through tales of Batman and the hidden killer, Superman and Lois Lane and the killer in their back seat, Harley Quinn and Darkseid versus a furious Bloody Mary, and four more stories so hair-raising you’ll call your momma to come pick you up. So toast your marshmallows, pull up a s’more, and answer the only question that matters this Halloween: Are you afraid of Darkseid?

After suffering too many losses, Slade Wilson decides it’s time for a change. When he’s enlisted to work with an ages-old secret organization called T.R.U.S.T. who want to take down the heavy-hitter villains, he’s all in. They’ll supply him with an all-new team and resources for his new mission into the depths of the weirdest parts of the DCU, including a new partner…Black Canary! Wait what?! Enjoy explosions, kick-ass action, and new outrageous adventures as DC’s meanest S.O.B. gets tangled up in a major mystery building in the shadows of the DCU.

Release Date:  2021-11-02
Item Code: 0721DC159
Paranoia reigns supreme. It’s 1976, and this is the final chapter of the Eisner Award-winning American Vampire! At a seedy motorcycle rally in the desert where Skinner Sweet is closer than ever to his death wish, Pearl Jones and a shocking partner track him down for one last, desperate mission as the series that launched the careers of superstars Scott Snyder and Rafael Albuquerque concludes! Collects American Vampire 1976 #1-10.

AN EPIC NEW ERA FOR THE SINISTER SYMBIOTE STARTS HERE!

Hot off the heels of VENOM #200 and EXTREME CARNAGE, we’re closing out 2021 with one of the most ambitious books in symbiote history – an all-new VENOM from some of comics’ greatest talents! Marvel mainstay AL EWING, who himself has just ended a character-redefining run on IMMORTAL HULK, is being joined by RAM V, a horror maestro all his own, to craft a mind-bending and gut-wrenching tale of symbiosis the likes of which the Marvel Universe has never seen! AS IF THAT WASN’T ENOUGH, they’ve been joined by industry legend BRYAN HITCH, who is leaving IT ALL ON THE PAGE! We haven’t led you astray yet, have we? So trust us when we tell you that you have NEVER seen a VENOM like this!

COME JOIN THE FESTIVITIES AS MARVEL CELEBRATES THE MIGHTY LATIN-X
HEROES AND CREATORS FROM ALL CORNERS OF THE MARVEL UNIVERSE!

Spider-Man! White Tiger! Ghost Rider! And so many more heroes get their moment in the sun as new and fan-favorite creators continue to expand the world outside your window in MARVEL’S VOICES: COMUNIDADES (Community)! Featuring an introduction by renowned scholar Frederick Luis Aldama! PLUS, an all-new hero takes the stage in a whirlwind adventure you won’t want to miss.

STRAIGHT OUT OF HER TRANSFORMATION IN AVENGERS, ECHO GETS AN

Against all odds, one of the most powerful entities in the Marvel Universe chose Maya Lopez, a deaf street fighter, as its new avatar. And the burning question on everyone’s minds is: WHY?! But Echo is the last person to answer. Still learning her new cosmic abilities – and struggling with the Phoenix’s overwhelming personality – Echo strikes out to return to her roots. But the reservation has even fewer answers. And where power goes, evil follows. Someone wants Echo to fail – and unleash a power only the greatest heroes in

history have been able to control. Avengers artist Luca Maresca joins superstar writer Rebecca Roanhorse for a story that will light the universe on fire!

Peter Parker. Spider-Man. Scientist. Troublemaker? Thanks to none other than Tony Stark, a new scientific research station for the teenage heroes of the
Marvel Universe has just been completed – and Spider-Man just got an invitation to join! Working alongside some of your favorite faces from the MU, inventing
and studying a whole bunch of awesome new gadgets, and with Iron Man keeping an eye on the Worldwide Engineering Brigade, surely everything’s
going to go great, right? Either way, thanks to his newfound friends Spider-Man is about to take his great power and great responsibility across the globe.
Unfortunately, where the wallcrawler goes, chaos usually follows! And Spidey and the W.E.B. are about to run right into a big, green and angry example of
chaos personified! Collecting W.E.B. OF SPIDER-MAN (2021) #1-5.

Introducing the launch of the second new monthly title spinning out of the SPAWN UNIVERSE, with one of the most popular characters in the entire SPAWN mythology! This book contains three
separate GUNSLINGER stories, each taking a look at his journey through time – from the wild, wild west to the 21st century.

Will his 200-year-old past come back to haunt him as he navigates the strange world of 2021? Get ready for the past and present to collide in this new ongoing title!

Mind-bending sci-fi collides with Cold War thriller in this six-issue miniseries by the bestselling and Eisner-winning creative team behind GIDEON FALLS!
In 1957, the USSR launched the dog, Laika, into Earth’s orbit. Two years later, the USA responded with two monkeys, Able and Baker. These animals never returned. But, unbeknownst to everyone, they did not die in orbit…they were taken. And now they are coming home.

Hellboy learns about the mysteries of an exorcism gone wrong and more when his occult investigator relative reveals secretive and perilous adventures of one of the Hellboy Universe’s most mysterious societies!  Silver Lantern Club member Simon Bruttenholm relates a tale from the dawn of radio, in which Sir Edward Grey and Sarah Jewel go toe to toe with . . . technology?

Changed by their experiences in Avernus, Krydle, Shandie, Delina, Nerys, Minsc, and Boo return home to Baldur’s Gate to find that something much more insidious has taken root… what could be behind the odd behavior of the Head Librarian of the Knowledge-Hold?

About This Collectible Figure

Hasbro and 3A are proud to present the courageous leader of the Autobots, Optimus Prime as the next exciting character in the Transformers DLX Collectible Figure Series!

A must-have for any Transformers fan!

Item shown is a prototype. When shipped, the final production piece may differ in appearance.

About This Premium Format™ Figure

The Carnage Premium Format Figure measures 21” tall and 17” wide as Cletus Kasady breaks free of his prison cell at Ravencroft Institute, which features an Easter egg related to his comic book debut. The sociopathic symbiote has a massive scythe arm at the ready, smiling with glee at the prospect of an unstoppable killing spree. If this villain has his way, there certainly will be Carnage.

The polystone Carnage Premium Format Figure is fully sculpted in the likeness of the character’s iconic Marvel Comics appearance. His matte red physique is detailed with swirling symbiote and sinews to create his signature flayed appearance while black, glossy tendrils of the alien substance form additional clawed weapons at Carnage’s disposal. His portrait has white eyes and black fangs, capturing the maniacal excitement of Cletus Kasady uncaged. Pair Carnage in your collection with any range of Spider-Man collectibles or Venom collectibles for an epic symbiote showdown on your shelf.

Item shown is a prototype. When shipped, the final production piece may differ in appearance.

For More Cool Stuff Check Out The August Previews Catalog,