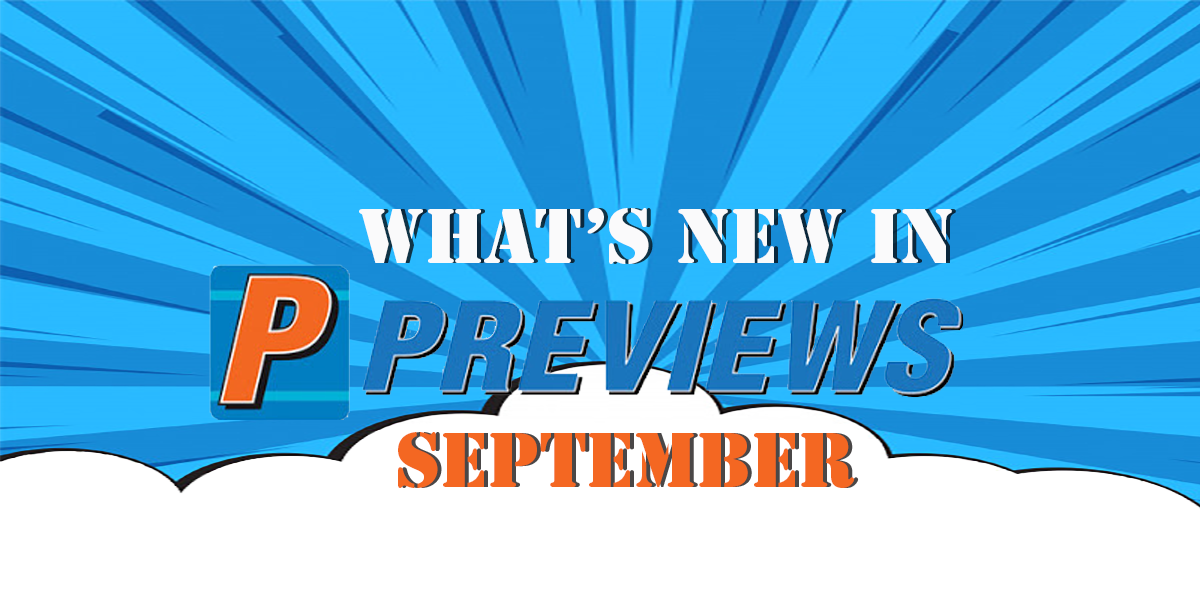 Below is a Sample of the exciting new items available for order in September. Items will ship in November and beyond.

Release Date:  2021-10-19
Item Code: 0821DC069
(W) Vita Ayala – Stephanie Williams (A/CA) Alitha Martinez
After the thrilling events of Infinite Frontier, Nubia becomes queen of Themyscira, but the new title also brings challenges. With the unexpected arrival of new Amazons, our hero is forced to reckon with her past and forge a new path forward for her sisters. Little does she know, a great evil grows beneath the island and it’s up to this former guardian of Doom’s Doorway to unite her tribe before paradise is lost forever! This unforgettable miniseries from writers Vita Ayala and Stephanie Williams, along with all-star artist Alitha Martinez (Future State) brings the fan-favorite character back to the DCU for good. After Nubia, the world of the Amazons will never be the same!

Hill House Comics is back and heads are going to roll for making readers wait! The new wave of titles begins with a rancid return trip to bloody Brody Island. For a year now, the mysterious axe that unleashed pandemonium during the hurricane of ’83 has waited at the bottom of the bay but nothing that powerful stays buried. Brody Island has new visitors, and a new sheriff in town, too—not to mention a dangerous great white shark spotted in its waters—and when vacationing couple Calvin Beringer and Arlene Fields find themselves on the wrong side of Brody’s unsavory elements, their beachcombing will turn up something a lot sharper than sea glass… Crime novelist Rio Youers joins forces with artist Tom Fowler to unleash a gonzo grindhouse expansion on the lore of the original Basketful of Heads!

Release Date:  2021-10-19
Item Code: 0821DC076
(W) Matthew Rosenberg (A/CA) Eddy Barrows
In life, they’ve terrorized the people of Gotham. Now, they are Gotham’s last hope. Task Force X saw villains working their way to freedom. Task Force Z will see dead villains working for a new chance at life! On A-DAY, the attack on Arkham Asylum left hundreds of Gotham’s most cunning and deranged criminals dead…now, a mysterious benefactor has activated the government’s TASK FORCE clause to bring them back as the ultimate army of the night! To lead this team of the undead, only a person who knows exactly what it feels like to be brutally murdered and brought back to life can handle the job…enter: RED HOOD. But when Jason Todd unravels the mystery surrounding Task Force Z’s creation, will he try to destroy it…or embrace it? BANE. MAN-BAT. THE ARKHAM KNIGHT. SUNDOWNER. MR. BLOOM. RED HOOD. THEY ARE TASK FORCE Z, AND DEATH WAS JUST THE BEGINNING…!

Release Date:  2021-11-02
Item Code: 0721DC159
Paranoia reigns supreme. It’s 1976, and this is the final chapter of the Eisner Award-winning American Vampire! At a seedy motorcycle rally in the desert where Skinner Sweet is closer than ever to his death wish, Pearl Jones and a shocking partner track him down for one last, desperate mission as the series that launched the careers of superstars Scott Snyder and Rafael Albuquerque concludes! Collects American Vampire 1976 #1-10.

Release Date:  2021-11-17
Item Code: MRVL0821425
Kate’s heading home! Or at least, back to New York. And as much as she wants to go back to where her friends – her chosen family – are, she’s changed since she was last on the East Coast. So she’s picked up a pit stop case first. A confidence-booster, to prove to herself she’s making the right decision and not going to backslide into her past just by changing time zones. Besides, the case is perfect: Swanky resort? Check. Jewel heist? Check. Almost definitely 100% a trap? Check. Don’t miss this exciting new miniseries from New York Times bestselling writer Marieke Nijkamp and artist Enid Balám!
In Shops: Nov 03, 2021

Meet the son of the greatest warrior the galaxy has ever known, as we celebrate the legacy of the House of Ideas with MARVEL TALES! This anthology series shines a spotlight on fan-favorite characters, features timeless stories, and highlights some of Marvel’s most impressive talent from the past eight decades! Spawned in a test tube, Genis-Vell now struggles to fill the boots of his late father Mar-Vell — the original Kree Captain Marvel! Genis has inherited Mar-Vell’s greatest gift, cosmic awareness — which might be enough to make him go mad, if he didn’t have Rick Jones along for the ride. But sharing a body, and switching places back and forth from the Negative Zone, might drive them both crazy! Get ready for Peter David and Chriscross’ hilarious CAPTAIN MARVEL (2000) #0-3 — featuring the Hulk, Wendigo, Moondragon…and Rick’s estranged wife, Marlo!

Release Date:  2021-11-03
Item Code: MRVL0821433
IMMORTAL NO LONGER! CATES & OTTLEY DELIVER A NEW, COLOSSAL-SIZED ERA! “MAD SCIENTIST” Part 1 of 6 The uncontrollable rage of the Hulk has reached an all-new level, and nobody – including the Avengers – is prepared to handle it. But is it really the Hulk that people should be afraid of, or is there something missing to this puzzle? Join the superstar creative team of Donny Cates and Ryan Ottley as they look to the stars for the next era of HULK!

THE MARVELS VOL. 1: THE WAR IN SIANCONG TPB

Release Date:  2021-12-14
Item Code: MRVL0821264
A thriller that will take readers across the Marvel Universe…and beyond! Kurt Busiek (MARVELS) is back, with the biggest, wildest, most sprawling series you’ve ever seen — telling stories that span decades and range from cosmic adventure to intense human drama, from street level to the far reaches of space, starring literally anyone, from Marvel’s very first heroes to the superstars of tomorrow! Featuring Captain America, Spider-Man, the Punisher, the Human Torch, Storm, the Black Cat, the Golden Age Vision, Melinda May, Aero, Iron Man, Thor and more — and introducing brand-new characters destined to be fan-favorites! Get to know Kevin Schumer, an ordinary guy with some big secrets — and the mysterious Threadneedle! But who (or what) is KSHOOM? It all starts here. And it goes…everywhere! Collecting THE MARVELS (2021) #1-6.

SEP210020(W)
Iolanda Zanfardino (A/CA) Elisa RomboliA chaotic LGBTQ+ road trip!
A workaholic scientist who wants to save the world and a woman who fears nothing but discovering her own destiny find themselves mixed up in a chaotic, on-the-road adventure through Europe. Will they manage to find a middle ground between their opposing ways of life – at least for long enough to complete their mission? And could this trip lead to an unexpected romance?In Shops: Nov 03, 2021

SEP210131 (W) Rick Remender (A/CA) Matteo Scalera, Dean WhiteGrant McKay, former member of The Anarchistic Order of Scientists, has finally done the impossible: He has deciphered Black Science and punched through the barriers of reality. But what lies beyond the veil is not epiphany, but chaos. Now Grant and his team are lost, living ghosts shipwrecked on an infinite ocean of alien worlds, barreling through the long-forgotten, ancient, and unimaginable dark realms. The only way is forward, through the madness of the lightning sea-swamp and a futurepast trenchworld, where the Sons of the Wakan Tech-Tanka wage never-ending war on the savages of Europe! How did the Anarchist League of Scientists end up this deep in the onion? And, who among them sabotaged the Pillar?In Shops: Oct 20, 2021

Pays great homage to one of Iron Man’s very first costumes, Hot Toys is delighted to unveil today the Iron Man Mark XXI (Midas) Sixth Scale Collectible Figure from Iron Man 3 as a Hot Toys Exclusive item. Painted in different shades of metallic gold and silver, the overall appearance of the highly-detailed figure has elevated with additional chrome painting to bring out the finer armor details.

The Iron Man figure made in diecast is crafted based on the image of Midas in Iron Man 3, has faithfully reproduced the distinctive design of the suit features a LED-light up helmeted head; LED light-up functions scattered throughout the upper body, back and Arc Reactor on chest; signature armor beautifully painted in mixed shades of gold, silver and bronze color; a variety of interchangeable armors parts, hands of Iron Man’s iconic poses; and a dynamic figure stand with movie logo.

This lustrous Iron Man will surely stand out in your House Party Protocol collection!

“…with this blank, pale, emotionless face, and the blackest eyes- the devil’s eyes.”

Sideshow presents the Michael Myers Deluxe Sixth Scale Figure, an articulated horror collectible that gives you control of this classic killer as he cuts through your collection.

Inspired by his iconic appearance in the original Halloween (1978) movie, the Michael Myers Deluxe Sixth Scale Figure wears a costume of tailored blue fabric coveralls and a black fabric undershirt as well as sculpted boots. The figure includes two distinct portraits, one featuring a detailed depiction of his infamous mask, complete with sculpted hair and weathering details, and one portrait with non-removable glasses and a fabric sheet ghost costume.

The Michael Myers Deluxe Sixth Scale Figure includes a variety of accessories to recreate multiple cinematic moments in your collection. The figure comes with eight different hands, including a pair of fists, a pair of grip hands, a pair of open hands, and a pair of posed gesture hands for interacting with his killer tools of the trade. Michael Myers also includes both a clean knife and bloody knife for holding, as well as a corded telephone accessory, perfect for terrorizing teenagers on Halloween night. The figure also features a Judith Myers headstone accessory and a carved Jack-O-Lantern with a light-up feature, both of which can be placed in proximity to the figure to create a more detailed Halloween scene.

Bring him from Haddonfield to your home when you add the Michael Myers Deluxe Sixth Scale Figure to your horror collection today.

For More Cool Stuff Check Out The September Previews Catalog,