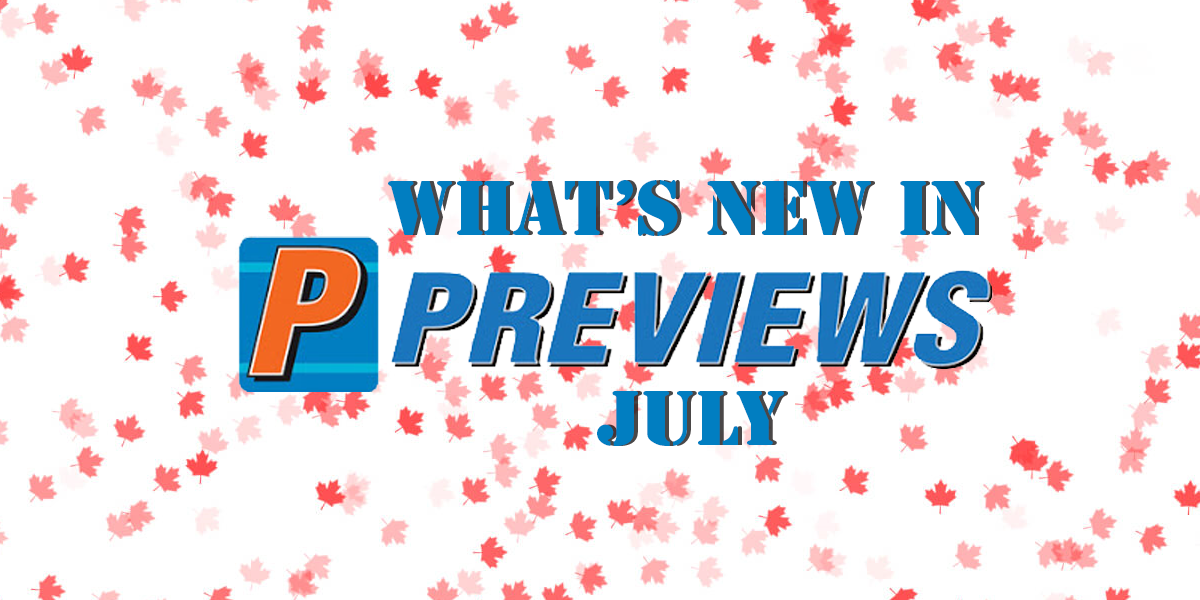 Below is a Sample of the exciting new items available for order in July. Items will ship in September and beyond.

The big finish to the adventure starting all the way back in the conclusion of Future State: Superman: Worlds of War. Midnighter traveled into the future to help get himself out of a jam, only to swap places with his future self. Now, the Midnighter from the future finds himself trapped in a paradox, working his way back to his onetime present to swap places again. Don’t worry if you’re confused—so is he! The key to this whole thing is Andrej Trojan, the nefarious industrialist who tried using Superman’s mission on Warworld to his own end. Midnighter has been carrying Trojan’s robotic skull with him, hunting for the 2021 iteration of the man, and shutting his whole company down before any of this trouble even starts. Finishing the serial, which runs in the back of Action Comics, this time-travel escapade also leads into Superman and the Authority!

Kevin here! You know, Harley’s sidekick, and your favorite new character? I know Harley usually does these solicits, but she’s a little tied up at the moment. Like, literally. See, there’s a new villain in Gotham calling himself Keepsake, and you know how Gotham villains are: definite psychological issues. So Keepsake kidnapped Harley, while trying to convince her to be his partner and help take over the city. Now, I don’t mean to imply that Harley’s not capable all on her own, but this time she needs a little help. Which means I’m teaming up with Solomon Grundy so we can visit Gotham’s worst criminals and figure out where Harley might be. Plus, a major new Bat-villain!

Once an agoraphobic scared to even leave her room, Jessica Cruz overcame her fear to become a Green Lantern and face the darkest and deadliest threats in the universe. But now, Jessica’s gone from overcoming fear to using it as a weapon. When Yellow Lanterns attacked the Green Lantern Sector House she took refuge in when the Central Power battery was destroyed, Jessica turned the tables on them, giving them something to be afraid of, as she beat them one-by-one. But now that she’s been offered a place in the Sinestro Corps, will she accept?

The epic epilogue to the Archive of Worlds saga! In his pursuit of perfection, the godlike Auteur.io sought to create and destroy worlds with the wave of a hand and a flair for the dramatic. But against all odds…the World of the Knight and the World of Tomorrow live on! The Batman of the noir-tinged streets of Gotham City finds himself stranded in the sunny, retro-futurist World of Tomorrow—and Superman discovers himself in the opposite predicament. With their home worlds in decay and only one chance to save them, the key to preserving their very existence is but the flip of a coin. Or the flip of this book! This special flip book is two times the story, with one full comic on one side and one full comic on the other, meeting in the middle! Follow Superman’s journey on one side of this epic flip book annual, and turn the adventure over to crusade with the Batman and his trusty sidekick, Robin!

Item Code: 0621DC205
Inspired by Charles Dickens’s immortal classic A Christmas Carol, Batman: Noel takes the Dark Knight on a journey into his own past, present, and future as he battles villains from campy 1960s rivals to dark modern menaces. While Batman fights for his soul in a frozen Gotham landscape, his supporting cast take up recognizable roles analogous to Dickens’s original holiday tale. Written and drawn by comic book superstar Lee Bermejo (Batman: Damned), Batman: Noel offers a beautiful and unexpected retelling of a beloved classic.

“INFINITE DESTINIES” CONCLUDES!The last secret of the Infinity Stones and Infinity Stone-Bearers is revealed here. Meet the new character who beats Captain America and Iron Man within an inch of their lives. What saves them? This character’s other desires. ALSO IN THIS ISSUE: The conclusion of “Infinite Fury”!

THE BIG GUN IS BACK! It’s a new era, in a new galaxy, that’s under siege from a deadly new threat…but you can still rely on one man. Cable is locked, loaded and landing on the deadliest planet in X-history – to steal the ultimate weapon…and stop the LAST ANNIHILATION!

A Special Encore Return to the World of SPIDER-MAN: LIFE STORY by the Original Creative Team!

SPIDER-MAN. He’s a threat. He’s a menace. And J. JONAH JAMESON will do whatever it takes to make the world see it! But in this companion piece to last year’s hit miniseries SPIDER-MAN: LIFE STORY, will the decades of his obsession bear fruit for Jonah…or be his destruction?

CHIP ZDARSKY and MARK BAGLEY reunite for this story told in a world where Marvel’s beloved characters aged in real time!

Don your finest dress or sharpest suit — or get Jumbo Carnation to whip you up something new just for the occasion! You are cordially invited to the hottest mutant event of the season: the Hellfire Gala! Everyone who’s anyone in the hot new world of mutantkind will be there. All of your favorite heroes and their closest allies — and even their worst enemies — for a special night of dinner, drinks, diplomacy and deceit! The very first democratically elected team of Krakoan X-Men will at last be revealed to the world, and that’s just the first of the surprises mutantkind has in store for the evening! Whatever you do, don’t miss this one-of-a-kind X-event! Collecting MARAUDERS #21, X-MEN (2019) #21, PLANET-SIZE X-MEN #1 and S.W.O.R.D. (2020) #6 & material from Classic X-Men #7.

PATIENCE! CONVICTION! REVENGE! ATRICK KINDLON & MARCO FERRARI return with an all-new ONGOING SERIES!
Classic Green Arrow-style adventure blends with the thoughtfulness of Concrete in a super-hero odyssey for mature but uncynical readers! Frontiersman is coaxed out of retirement by an environmentalist group, only to find that being a spokesperson makes him a target for old and new enemies alike! For the super-hero reader looking for me.

Mind-bending sci-fi collides with Cold War thriller in this six-issue miniseries by the bestselling and Eisner-winning creative team behind GIDEON FALLS!
In 1957, the USSR launched the dog, Laika, into Earth’s orbit. Two years later, the USA responded with two monkeys, Able and Baker. These animals never returned. But, unbeknownst to everyone, they did not die in orbit…they were taken. And now they are coming home.

ASH IS BACK, BABY!

After his most recent appearance in Die!namite Lives, Ashley Williams is retired. Settled down. Haunted by the Deadites and the Necronomicon no more- wait, no, that ain’t right… None of that is true! In fact, not only is Ash still haunted by Deadites and the Necronomicon, but he’s haunted by the both of them in the 1970s (kids, ask your parents. Parents, ask yourselves!)! And what does he find in the South Bronx of the late 70s? Gangs! And what have those gangs found? The Necronomicon. So, what does that make the gangs? Bad-Ass Mxxxerfxxxers.

Dynamite proudly presents a brand new Army of Darkness series, written by Rodney Barnes (Killadelphia), drawn by Tom Garcia and featuring an awesome array of cover artists, including the Dynamite return of Jason Shawn Alexander, along with Junggeun Yoon, and Stuart Sayger and the Zombie King himself — Arthur Suydam!

Rodney Barnes is an American screenwriter and producer. Barnes has written and produced The Boondocks, My Wife and Kids, Everybody Hates Chris, Those Who Can’t, Marvel’s Runaways, American Gods, Wu-Tang: An American Saga, and is currently an executive producer/writer on HBO’s Untitled Los Angeles Lakers drama. In comics, Barnes is the creator of the critically acclaimed Killadelphia from Image Comics, and has written Falcon and Lando (Star Wars) for Marvel Comics.

Join Cavan Scott, Francesco Francavilla, and a host of classic Star Wars artists in the epic conclusion to the Vader’s Castle saga! Star Wars Adventures: Ghosts of Vader’s Castle is a horror-packed, star-studded, five-week event guaranteed to haunt your dreams.
In issue #1, life is looking up for Lina and Milo Graf and Crater, but Milo has been having nightmares… about zombie droids! Find out what’s causing these dreams and if Milo can handle being haunted by the GHOSTS OF VADER’S CASTLE.

Sideshow presents The Dude Sixth Scale Figure, ready to just take it easy in your display of movie collectibles.

You can call him The Dude, His Dudeness, Duder, or El Duderino if you’re not into the whole brevity thing. This detailed collectible figure features the likeness of actor Jeff Bridges as the iconic Jeffrey “The Dude” Lebowski from cult favorite film The Big Lebowski. Dressed in his slacker finest, The Dude features a carefully tailored fabric outfit consisting of a white V-neck shirt, drawstring pants, and his signature sweater. The figure includes a padded undersuit to fill out his silhouette, and the look is completed with a pair of clear sandals on his feet.

Strikes and gutters, ups and downs — The Dude Sixth Scale Figure is a highly articulated, poseable collectible with a number of accessories and swap-out features giving you complete control over your display. The figure includes nine different hands, including a pair of grip hands, a pair of cup-holding hands, two unique pairs of gesture hands, and a bowling ball hand. There’s a beverage here with four unique White Russian drink accessories, plus a pair of sunglasses, a fabric bowling bag, and a bowling ball for even more posing options. A rug-themed figure stand really ties this piece together, making The Dude a must-have for fans of the unforgettable film.

The Exclusive Edition of The Dude Sixth Scale Figure includes an additional swap-out smoking hand, giving you an extra display option for letting Lebowski kick back and relax on your shelf.

This is a very comprehensive collectible. You know, a lotta ins, a lotta outs, lotta what-have-yous. Bring home The Dude Sixth Scale Figure for your collection today!

To further expand Marvel’s Spider-Man collectible series, Sideshow and Hot Toys are delighted to introduce the sixth scale Spider-Man (Cyborg Spider-Man Suit) collectible figure capturing one of the signature looks of the wall-crawling hero. This amazing figure is a Toy Fair Exclusive item!

Don’t miss out on the chance to recruit the latest Spider-Man figure to your Spidey collection!

For More Cool Stuff Check Out The July Previews Catalog,