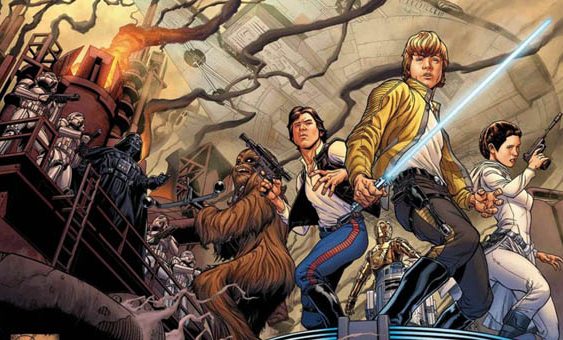 Earlier this month at New York Comic Con Marvel announced that the Star Wars series that started in 2015 will conclude in November with issue #75.  Until now the series has been set directly after the events of A New Hope following well known characters like Luke, Leia, Han, and Chewie in never before told adventures.  The series was a solid read and gave some interesting insight into the events between Episodes 4 and 5.  This period in the comics will wrap up with Star Wars: Empire Ascendant #1 hitting shelves in December.

However Marvel is well aware of the popularity of the franchise in comic form and isn’t going to leave us hanging.  January will see a relaunch of a new Star Wars comic taking place after The Empire Strikes back.  Charles Soule, who is no stranger writing Star Wars comics (Star Wars: Darth Vader, Star Wars: Poe Dameron) will take the helm along with art by by Jesus Saiz (Swamp Thing).  Soule will explore how the Rebel Alliance grows into a full fledged fleet we see in Return of the Jedi and how Luke Skywalker goes from a one handed guy with Daddy issues to the black wearing bad ass in Jabba’s Palace.  Also of interest key player Han Solo won’t be part of the series due to being frozen in carbonite.  This will give room for other characters like Lando Calrissian to take some of the focus.  I’m very interested to see how they develop Lando in this space.  The comic promises to be a bit darker than the previous series as the stakes are already higher in the universe.

In addition to a new Star Wars series the third iteration of Darth Vader will launch in February 2020 written by Greg Pak (Star Wars, Star Wars: Age of Rebellion) with art by Raffaele Ienco.  Not much has been announced from this series beyond it being in the same time period as the new Star Wars Title and that it will further explore the Sith Lords past.  A number of arcs in the 2015 Star Wars and Darth Vader series had parallel stories and occasional cross-overs that were very well done.  While I’ve felt Vader has been over done recently with a number of sub-par mini-series I’m hoping this ongoing series will be as good as the 2015 and 2017 ones that both had great treatments.

Another ongoing series is fan favorite Doctor Aphra.  This original character was introduced in Darth Vader (2015) and appears to be wrapping up with issue #40 in December.  While the end of the series has not official been announced the issue write up certain gives the feeling that it too will be coming to an end.  Maybe we will see a time jump for the good Doctor.

If the current trilogy is more your speed there are a few options to tide you over until The Rise of Skywalker hits the big screen.  Star Wars: Rise of Kylo Ren is a four part mini-series starting in December follow young Ben Solo and reveal what forces influenced his choices that led him to becoming Kylo Ren, Master of the mysterious Knights of Ren.

If all of this wasn’t enough Marvel also teased something totally new that will span both comics and novels from some top-tier authors.  What Project Luminous is, is open to wide speculation at this point.  I feel like no real details will emerge until after The Rise of Skywalker has come out.  With the possible end of the Jedi maybe this will detail a new Force using faction?  Maybe it will be our first into the universe beyond the Skywalker Saga.  Maybe it will reveal the true nature of (we can hope not).  Whatever it is I’ll be eagerly awaiting more information.

If you are currently subscribed to any of these series, when they switch over the the relaunch you will have to re-subscribe so please make sure to let us know.  If you have not been following Star Wars comics these are a great place to jump into a galaxy far, far, away!