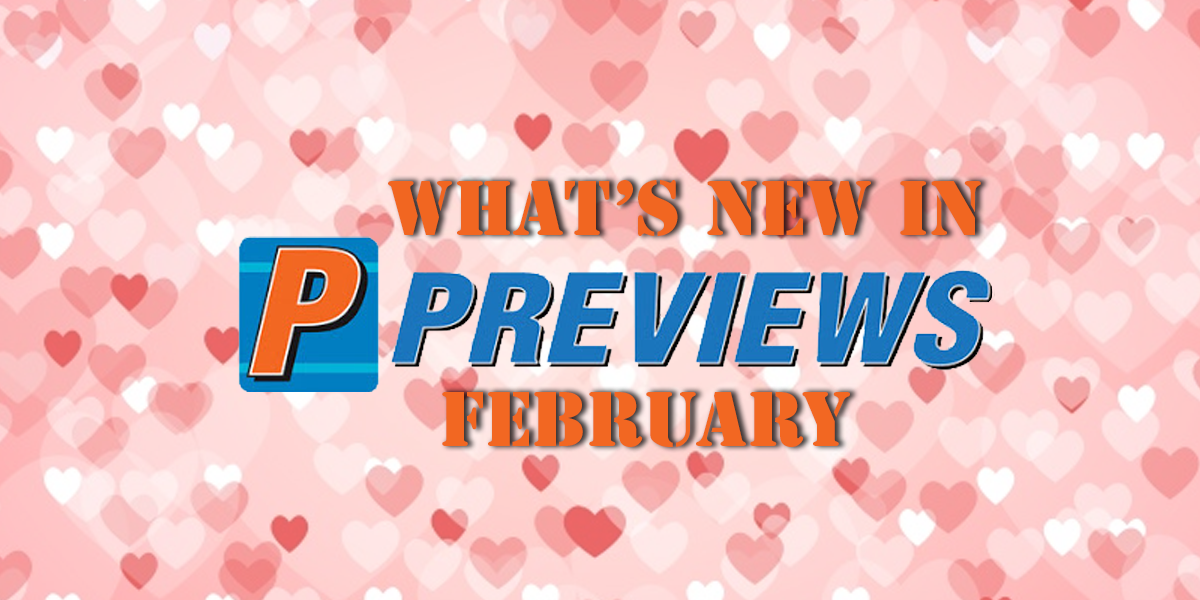 Here is a Sample of the exciting new items available for order in February. Items will ship in April and beyond. **All Prices are USD

Our gal Catwoman is turning 80 next year (and looking very good, if we meow say), and DC is celebrating with nothing less than with a huge soiree, invite only, packed with creators who mean the most to her and to whom she means the most! Stories featured in this 100-page spectacular include a tail-sorry, tale-that takes place at the end of the Brubaker/Stewart Catwoman run, in honor of artist Darwyn Cooke. Plus, Catwoman is caught by an exotic cat collector, runs into a wannabe thief trying to prove himself as her apprentice, encounters a mystery involving memorabilia from alternate continuities, and of course some Bat/Cat fun.

The Clown Prince of Crime celebrates 80 years of chaos! The Joker has been the greatest villain in comics since his debut and to celebrate we have a who’s who of comics’ finest talent giving the Harlequin of Hate the birthday roast he deserves. The stories feature a range of terror and anarchy, showing how the Joker has impacted Gotham City from the police to Arkham Asylum, from the local underworld to the Dark Knight and his allies! Make sure to RSVP to this birthday bash-you wouldn’t want to wake up with a Joker Fish on your doorstep, would you?

Something is amiss in the DC Universe. Following the events of DC Universe: Rebirth and Batman/The Flash: The Button, Geoff Johns and Gary Frank reunite to rewrite the past and future of the DC Universe in a story hailed as a masterpiece!
Seven years after the events of Watchmen, Adrian Veidt has been exposed as the murderer of millions. Now a fugitive, he has come up with a new plan to save his once-adoring world: find Dr. Manhattan. Alongside a new Rorschach and the deadly Mime and Marionette, he arrives in the DC Universe and finds it on the brink of collapse. International tensions are running rampant with the Supermen Theory implicating the U.S. government in creating superhumans to maintain global dominance! But what is Dr. Manhattan doing in the DC Universe? Find out in these stories from DOOMSDAY CLOCK #1-6!

Batman who Laughs vs Batman Statue

designed by JIM FLETCHER
sculpted by ALTERTON
Which side will win in this epic new battle statue between Batman and the Batman Who Laughs? Good or evil? That is up to you when this 1:8 scale statue joins your collection.
•  Limited to 5,000 pieces and individually numbered
•  Statue measures approximately 13″ tall
•  Allocations may occurIn Shops: Aug 26, 2020SRP: $375.00

Best-selling, Eisner-nominated writer Kelly Thompson (CAPTAIN MARVEL, STAR) and rising star artist Elena Casagrande (Catwoman) launch a new BLACK WIDOW series that changes everything! Natasha Romanoff has been a spy almost as long as she’s been alive. And she’s never stopped running, whether she was working for the good guys…or the bad. But Natasha’s world is about to be upended. Beyond San Francisco’s Golden Gate lies a mystery that only the Marvel Universe’s greatest spy can solve. Don’t miss the heartbreaking thrill ride of 2020!
Rated T+

WHEN DID THE X-MEN GET SIDEKICKS?!
Now! Don’t miss the debut of the greatest teenage super hero team of all time! They’ve learned from the best, now they’re ready to be put to the test! But who the heck are these kids, and where do they come from? Guest-starring the X-Men!
Rated T+

The new generation claims the dawn! The classic New Mutants – Sunspot, Wolfsbane, Mirage, Karma, Magik and Cypher – get together with new friends Chamber and Mondo for a new mission…tracking down their teammate Cannonball! Hitching a ride into outer space with the Starjammers, the New Mutants soon find themselves in trouble and on trial for crimes against the Shi’ar Empire! But when Deathbird returns and throws the Empire into turmoil, the New Mutants’ happy reunion soon becomes a complicated struggle for galactic freedom! Who will claim the Shi’ar throne? It’s a star-spanning adventure from the mind of X-visionary Jonathan Hickman! Collecting NEW MUTANTS (2019) #1-2, #5 and #7.
Rated T+

SERIES PREMIERE! A CATACLYSMIC ADVENTURE DECADES IN THE MAKING!

In this WILDLY AFFORDABLE TRIPLE-LENGTH FIRST ISSUE, revisit how the legend of the greatest pulp hero of them all, ADVENTUREMAN, ended in a heartbreaking CLIFFHANGER with our hero facing execution at the vile hand of his ultra-nemesis BARON BIZARRE on the eve of the MACABRAPOCALYPSE…or did it?!? Eighty years after his apparent demise, single mother Claire and her Adventurefan son Tommy seem to be the only two people alive that remember the thrilling ADVENTUREMAN sagas…but from that memory burns THE SPARK OF RESURRECTION! WHERE HIS STORY ENDED…HER STORY BEGINS! This sense-obliterating, earth-shaking, imagination-quaking adventure that spans generations comes to you from MATT FRACTION (SEX CRIMINALS, Hawkeye) and TERRY & RACHEL DODSON (X-Men/Fantastic Four, RED ONE)!!!

SERIES PREMIERE! ALL-NEW series created by ROBERT KIRKMAN (THE WALKING DEAD, INVINCIBLE, OBLIVION SONG) and Chris Samnee (Daredevil)! Owen Johnson’s journey to China to learn about his birth parents eventually leads him to a mysterious Shaolin Temple. The students there study to rediscover the Fire Power, the lost art of throwing fireballs. A power they claim will be needed soon to save the world. Will Owen Johnson be the first person in a thousand years to wield the FIRE POWER?

Twelve years after the events of The Boys, Hughie finds himself back home in Scotland where he intends to finally marry Annie in the company of friends and family. But the sudden appearance of a peculiar document sends our hero into a tailspin and threatens to bring the events of his nightmarish past crashing down on him in the worst possible way. There was one story about The Boys that Hughie never knew. Now, whether he likes it or not, he’s going to.

A Diamond Select Toys release! Who? He’s Star-Lord, guardian of the galaxy and all-around cool guy! Leaning against a wall and listening to his Walkman, Peter Quill is the newest exclusive PVC diorama in the Marvel Gallery line! Measuring approximately 10 inches tall, this high-quality plastic sculpture features detailed sculpting and paint applications, and comes packaged in a full-color window box with a fifth-panel flap. Designed by Caesar, sculpted by Cortes Studios. Formerly a GameStop exclusive.

Fully embrace the cuteness of the 50-year-old Yoda species with this adorable 11-inch plush toy. He may look like a Baby Yoda, but this lovable creature is referred to as The Child. Inspired by the Disney+ live-action series The Mandalorian, this sweet Star Wars plush toy makes a Force-sensitive addition to your collection. Pictures shown are for illustration purposes only. Actual product may vary slightly.