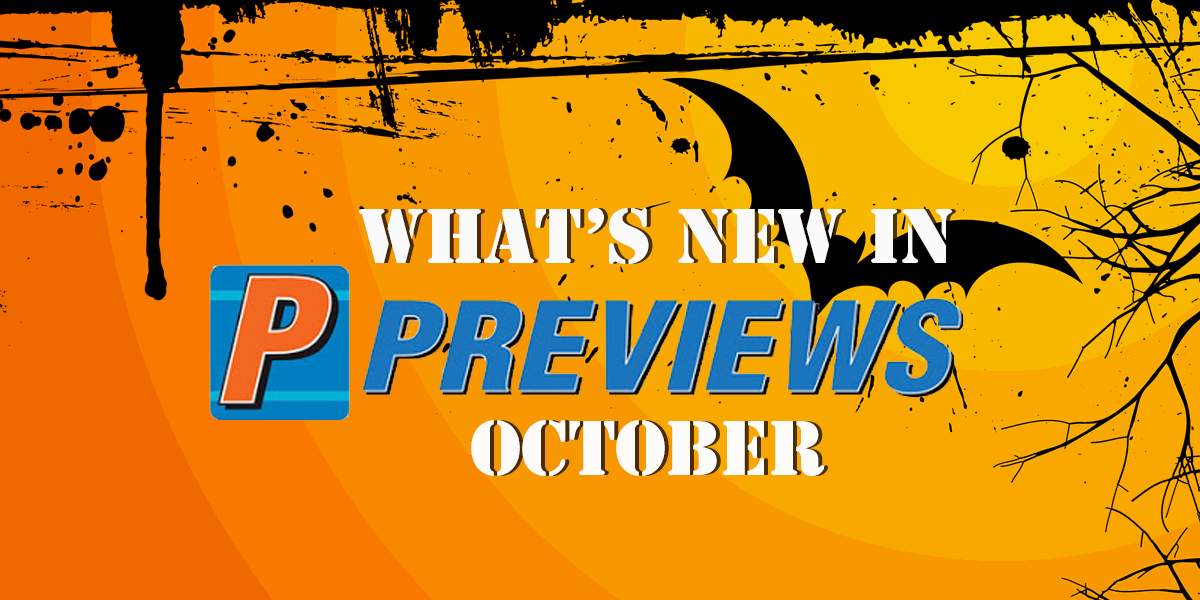 Below is a Sample of the exciting new items available for order in October. Items will ship in December and beyond.

It’s a freaky Friday when the Batgirls wake up inside each other’s bodies! That can’t be possible, right? It’s only stuff you see in the movies? Except Oracle has seen this happen before and the only person who may have the antidote to swap their bodies back…is Batman! And to make matters worse, Lady Shiva is here confronting her daughter about something…and it’s up to Steph to put on her best Cass to get through it!

The Sandman Universe grows as two of its most beloved characters return to the spotlight! Charles Rowland and Edwin Paine have been detectives for decades–and dead best friends even longer. But their investigation into a Thai American girl’s disappearance from her Los Angeles home puts them on a collision course with new and terrifying ghosts that could give even a dead boy nightmares–including a bloodthirsty krasue. Even scarier than the ghosts? Though neither wants to admit it, the boys might be growing apart. And perilously close by to the boys’ adventure, Thessaly the witch finds herself held hostage by dangerous magics–both a threat to her life and an insult to her ego that simply will not go unanswered… Eisner Award-winning writer Pornsak Pichetshote (The Good Asian, Infidel) is joined by celebrated artist Jeff Stokely to take the Dead Boys to the scariest place of all: the heart of Hollywood!

THE X-MEN ARE ENSNARED IN CHASM AND THE GOBLIN QUEEN’S DARK WEB! Chaos reigns in the streets of New York City as demon hordes pour forth from the realm of Limbo…a realm that until recently was ruled by Magik. A realm now ruled by Cyclops’ ex. Also, Havok’s ex. Also, a clone of Jean. The X-Men wade into the fray by taking on some of their darker history as the Goblin Queen returns for vengeance!

HIGHER. FURTHER. FASTER. Universal powerhouse MONICA RAMBEAU stars in her very own all-new adventure! The hero known as PHOTON has been charged with making a very special, very cosmic delivery – should be light work (get it?) for Monica…if family drama doesn’t hold her back!

The end of the Spider-Verse is coming! The original saga brought you Spider-Gwen, Peni Parker and more instantly iconic web-slingers. This final epic will take you to the bleeding edge of the Spider-Verse, reacquainting you with old favorites and introducing you to some of the most important characters you haven’t met yet – but it will also slice the final strand of the web. Featuring Spider-Ham, Spider-Gwen, the Spider-Mobile and Spider-Man Noir! Discover Araña’s new status quo! Learn the legacy of Spider-UK! Meet the sensational Spider-Rex! The singing princess, Spinstress! Sergei Kravinoff, the Hunter-Spider! The amazing Sun-Spider! The mysterious Night-Spider! And more! Collecting EDGE OF SPIDER-VERSE (2022) #1-5.

Why sell your soul…when you can buy a new one?

In a corporate-ruled world where class inequality is greater than ever, a desperate, lonely populace is drawn to neo-spiritualism and hedge magic.

When their teenage daughter is murdered, the Marks family is left asking the gods what they did to deserve this. But their android maid, Which-Where, has a different approach. Perhaps if she asked the devil…

THE MAGIC ORDER meets Do Androids Dream of Electric Sheep? in this dark mashup of witchcraft and sci-fi.

Presenting here the first major work from the creative minds behind ICE CREAM MAN-re-lettered, remastered, and under its original intended name!

The world of fine art is falling apart, and only ART BRUT knows how to fix it. Alongside the Bureau of Artistic Integrity, Arthur Brut the Mad Dreampainter (and his trusty sidekick, Manny the Mannequin) must dive back into the very paintings that made him insane…or reality itself might just crumble to pieces. A colorful, gonzo romp through art and art history, ART BRUT is equal parts police procedural, hyper-fantasy, and psychological thriller-a veritable Pollock-splatter of comics genres tossed onto one giant pulpy canvas!

Originally published under the title The Electric Sublime, this special edition presents the NPR-lauded, critically acclaimed material in its intended form.

Helgi, the prince of a Viking village, has stumbled upon the cursed Eye of Odin. If he doesn’t return it to its rightful owner by the new moon, he will die an agonizing death of boils and decay. By his side are Stigr, a one-armed warrior past his prime, and Kadlin, a female warrior convinced she’s a Valkyrie. Their only path will take them through the treacherous lands of the Hundrafolk, Trolls, and Earthen Smiths.

Collects BEWARE THE EYE OF ODIN #1-4

The wealthiest people in the solar system abandoned the Earth for a private sanctuary in space, leaving the rest of us to die amidst cataclysmic climate change.

But the 1% won’t be safe for long…A murderer is on the loose, specifically targeting the super-rich.

Soon Elise, an employee of the billionaire’s space station, is wrapped up in a deadly investigation, with each issue featuring a new, diabolically different kill!

2021’s breakout writer Sarah Gailey (Eat the Rich) and rising star Liana Kangas (TRVE KVLT) take a stab at the ultra-wealthy, their dreams of escaping the very planet they’ve put in peril, and the consequences of a future that might not be so far away…

A Diamond Select Toys release! Steven Grant and Marc Spector team up to become the most unusual superhero around – Moon Knight! Based on his appearance in the Disney + Series, Moon Knight crouches on top of an Egyptian column in this approximately 10-inch sculpture. Made of high-quality PVC, it features detailed sculpting and paint applications, and comes packaged in a full-color window box. Designed by the Silva Bros., sculpted by Eduardo Trujillo!

About This Sixth Scale Figure

Bestowed the almighty powers of the gods, Teth Adam has used these powers for vengeance, he was imprisoned, becoming Black Adam. Thousands of years have passed and he has gone from man, to myth, to legend. Inspired by the upcoming movie from DCEU, we are introducing the Deluxe Version of Golden Armor Black Adam in sixth scale collectible figure as the latest addition to our proud DX series!

This deluxe golden armor version includes an additional head sculpt with separate rolling eyeballs applied and luminous reflective effects, also a highly-elaborated diorama base depicting the wreckage of a destroyed historic site with diorama accessories that are attachable to figure’s body.

He is unstoppable! Add Black Adam to your DC figure collection today.