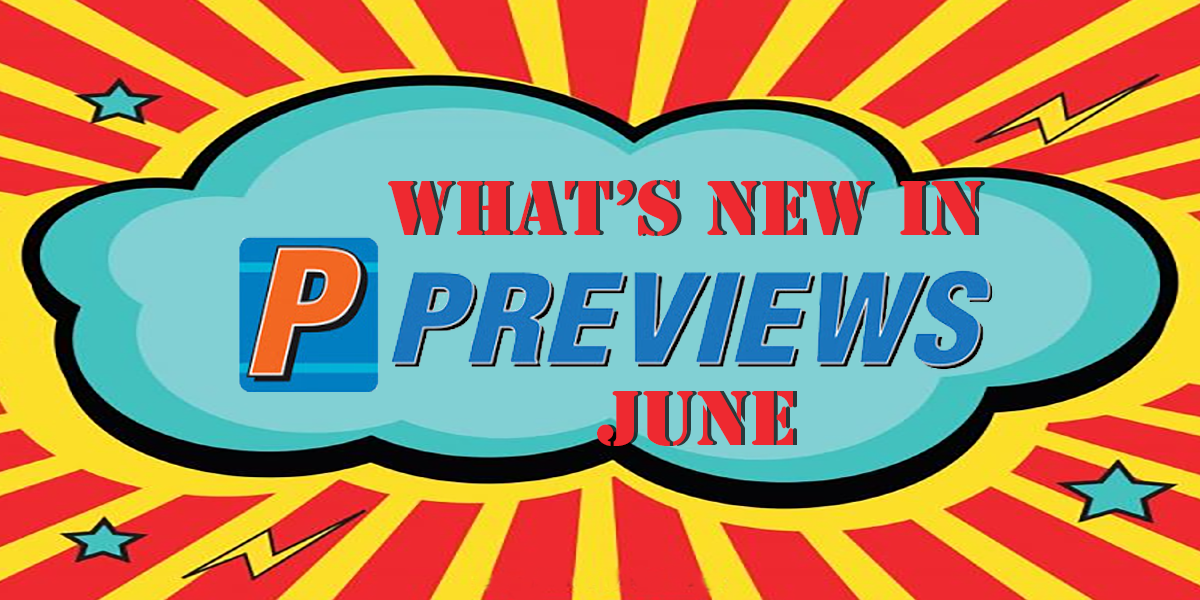 Below is a Sample of the exciting new items available for order in June. Items will ship in August and beyond.

BATMAN ONE BAD DAY THE RIDDLER #1 CVR A

The Dark Knight’s greatest villains get their greatest stories yet! The Riddler, Two-Face, the Penguin, Mr. Freeze, Catwoman, Bane, Clayface, and Ra’s al Ghul—Batman’s most iconic villains are all given 64-page Prestige format specials that show why they are the greatest villains in all of comics, spearheaded by today’s top talent. We begin with Batman – One Bad Day: The Riddler! Tom King and Mitch Gerads, the Eisner Award–winning duo behind Mister Miracle, The Sheriff of Babylon, and Strange Adventures, reunite to dive deep into the mind of Batman’s most intellectual foe…the Riddler. The Riddler has killed a man in broad daylight for seemingly no reason, but…there’s always a reason. The Riddler is always playing a game, there are always rules. Batman will reach his wits’ end trying to figure out the Riddler’s true motivation in this epic psychological thriller; this is not to be missed!

DCEASED WAR OF THE UNDEAD GODS #1 CVR A

What began as a battle for Earth has become a war for the galaxy as the epic final chapter in the massive DCeased franchise is here! The emergence of a reborn, undead Darkseid in DCeased: Dead Planet sets the stage for the most devastating conflict yet for Batman, Superman, and Wonder Woman! As the Anti-Life Equation spreads into the cosmos, the survivors of Earth prepare for the coming apocalypse and realize their only hope could lie in the most powerful surviving hero from the first DCeased series… The bestselling creative team of Tom Taylor and Trevor Hairsine return for their third and final installment in War of the Undead Gods!

SWORD OF AZRAEL #1 (OF 6) CVR A NIKOLA CIZMESIJA

THE WARRIOR ANGEL OF ST. DUMAS RETURNS! Jean-Paul Valley does not want to be Azrael ever again. All it has brought him is pain, violence, and misery. He has sequestered himself away at a monastery in Europe to find peace. But when a young woman who claims to have the same System programming that made Jean-Paul into Azrael arrives at the monastery, he won’t have a choice but to don his violent mantle of Azrael once more to protect her from the deadly assassins who wish her harm. From the rising star creative team of Dan Watters (Arkham City: The Order of the World, Lucifer) and Nikola Cižmešija (Batman: Urban Legends, Future State: Gotham) this miniseries will redefine one of the Batman world’s most iconic and fierce characters.

Art by Cully Hamner, Duncan Rouleau, Rafael Albuquerque and others High school student Jaime Reyes is thrust into the life of a hero after an encounter with extraterrestrial armor transforms him into the Blue Beetle! What is the armor’s true purpose, and what evils will our planet face if Jaime isn’t strong enough to use the armor correctly? Find out in BLUE BEETLE: JAIME REYES BOOK ONE, collecting BLUE BEETLE #1-12.

ENTER THE GRINDHOUSE OF X! When Jubilee and Boom-Boom agree to take Dazzler out for a night on the town to console her after her nasty breakup, they have no idea they’re about to be kidnapped and put into elaborate death traps for their efforts! What are three girls with the power to blow things up to do? Leah Williams and Carlos Gómez put the X in eXploitation in this tale of blood, sweat and REVENGE!

Marvel’s Unsung Heroes finally get sung! After the mega-powered battles and Hulk-level catastrophes, Damage Control is always there to clean up the mess and get things back to normal. But Damage Control is much more than just a glorified cleanup crew, and this new series will pull back the curtain and reveal the secret inner workings that were previously only available to people with Clearance Level Eight. And we’ll witness it all through the eyes of Gus: a fresh-faced, eager newcomer to the company who has no idea how chaotic his life is about to become.
ADAM F. GOLDBERG (TV’s The Goldbergs) and HANS RODIONOFF team up with WILL ROBSON to take you into the secret labyrinth of Damage Control, where it’s totally common to run into familiar faces like Moon Knight! Nightcrawler! She-Hulk! And more!

A cataclysmic crossover destined to be a smash hit! Hulk and Thor have both undergone massive changes recently, but one thing remains constant: their heated rivalry! When mysterious circumstances bring them into conflict once more, will the God of Thunder be able to triumph against a Bruce Banner who can now control his rage? And will Iron Man regret coming between these two titans – even with his new Celestial Hulkbuster armor?! Celebrating the 60th Anniversary of both characters, writer Donny Cates pits the stars of his two titles against one another in his biggest blockbuster yet – and that’s saying something! Key mysteries from HULK and THOR will be revealed, and this clash will have shocking consequences for the future of both characters! Collecting HULK VS. THOR: BANNER OF WAR ALPHA (2022) #1, THOR (2020) #25-26 and HULK (2021) #7-8.

OCCULT NOIR. MIAMI SLEAZE. Sebastian Harlow is the Black Flamingo, a flamboyant and narcissistic thief who gets his kicks stealing mystic artifacts from the wealthy and corrupt of Miami’s occult underground. When his latest job leads him to his biggest score so far, the hedonistic outlaw discovers something he wasn’t looking for-something to believe in.

“‘Be Gay, Do Crimes’ as pure pop art. This outlaw occultist queer heist book goes for your throat, your heart, your groin, and your wallet, and will leave you covered in glitter and feathers, absolutely breathless.” -KIERON GILLEN (THE WICKED + THE DIVINE, DIE)

“SINS OF THE BLACK FLAMINGO is a drop-dead gorgeous, funny, and sexy book! Within pages you immediately know that Sebastian Harlow is the most exciting new character in years! Dripping with WHEELER’s wit and looking fabulous thanks to stunning work by MOORE and BONVILLAIN, you’re going to want more immediately!” -CHIP ZDARSKY (SEX CRIMINALS, Daredevil)

It’s been one year since a comet hit Earth and blotted out the sun. Now, the world is a dark, cold landscape ruled by vampires.

In the British countryside, a band of survivors has formed a resistance in the fallout shelter of a medieval castle. Among them is Darcy, a young, headstrong fighter waiting for the chance to prove she can be on the front lines. But when that opportunity comes, Darcy will come face to face with the true horrors of this new world.

From creator TRAVIS BEACHAM (Pacific Rim) and artist STEPHEN GREEN (Hellboy and the BPRD) comes the prequel to the hit Audible Original.

The follow-up to 2021’s surprise cartoon/horror smash hit, STRAY DOGS! In DOG DAYS, each of the Strays gets their moment to shine with a series of vicious short stories. Questions are answered, mysteries are solved, and old wounds get torn open. This genre-bending thrill ride takes the reader from the first dog the Master captured to the final moments at his house of horrors.

In the Victorian London, an Intruder from the Outer has been summoned, leaving behind a series of gruesome killings. The mysterious Professor Hawke helps the possessed Jane Grantley to get rid of the creature. Hawke is an old, powerful wizard. But he’s not the only wizard in London… and the others may not be on his side!

Welcome to Brooklyn Through the Looking Glass, where a golem with benefits, a spiraling genie, a demon who feeds on bad vibes, and a mischievous mermaid collide with heartbroken, hard-living, and hype-obsessed humans. Lesser Evils is a hilarious, pop culture-filled universe that explore what intimacy, spite, selflessness, and friendship mean today.
Episode 1: Emmett
Meet Lydia Loew, an artisan potter, who goes on a bender after a bad breakup. Then, in anguish and anger, she accidentally conjures up a golem from clay in her BUSHWICK studio. Enter EMMETT, a golem with benefits. He mixes a mean cocktail, is handy around the house, and will help Lydia exact revenge, with a vengeance.

A Diamond Select Toys release! Is it real, or is it Wandavision? Rising out of a flower of chaos energy, Wanda Maximoff prepares to unleash her true power upon the Marvel Cinematic Universe in this all-new Gallery Diorama from DST! Featuring detailed sculpting and paint applications, this sculpture is cast in high-quality PVC, and comes packaged in a full-color window box. Designed by Caesar, sculpted by Alejandro Pereira!

“Dreams are windows into the lives of our Multiversal selves.” – Doctor Strange

Marvel Studios’ Doctor Strange in the Multiverse of Madness continues to unlock the Multiverse in MCU and revealed more threats lurking through every dimension. The Master of Mystic Arts must journey into the unknown with mystical allies both old and new and confront variants of some familiar faces along the way.

To expand on the Marvel collection, Sideshow and Hot Toys officially presents the Doctor Strange Sixth Scale Collectible Figure inspired by Doctor Strange in the Multiverse of Madness.

Faithfully crafted based on the appearance of Benedict Cumberbatch as Doctor Strange in the movie, this figure features a newly developed head sculpt with short hair sculpture; an aesthetic recreation of the tunic outfit in layers, sculpted boots and arm wraps, a new Cloak of Levitation with blue patch; amazing accessories including The Book of Vishanti, a pair of handcuff, a number of mystic art effects, a dynamic figure base specially designed for the figure and the cape.

The Hot Toys team is excited to enrich the collector experience by adding a newly developed Doctor Strange head sculpt with a third eye on the forehead as seen in the post-credit scenes.

The new Doctor Strange figure is going to push your Marvel collection boundaries!

For More Cool Stuff Check Out The June Previews Catalog,