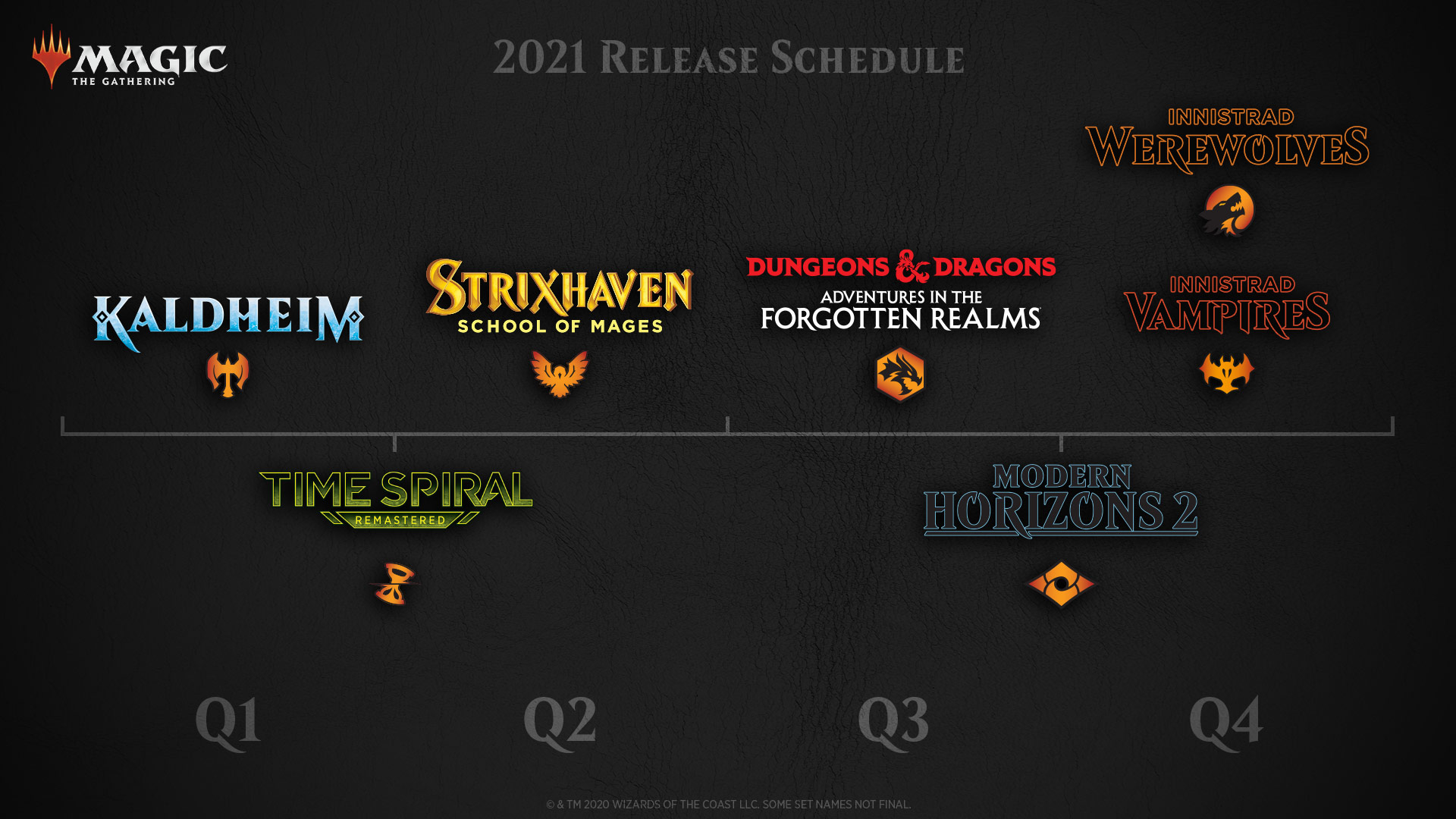 The set also includes 121 timeshifted cards that are a selection of cards from outside of the Time Spiral block reprinted with special time shifted retro frames.

Wizards is releasing four new Challenger Decks for 2021. These decks are competitive out of the box, include a variety of rares and mythics and built around strong archetypes that can be easily built upon. They are fantastic for beginners who want to build on their collection, great for some out-of-the-box games between friends and solid investments for anyone looking for key rares and mythics for their own decks or who just want to try different archetypes.

The following four decks are available:

Azorius Control
This deck is build around a strong blue/white control archetype and is loaded with counters, board wipes, removal and powerful finishers like Dream Trawler and Shark Typhoon to wrap up the game.

Dimir Rogue
A popular deck over the past year, Dimir Rogue sets an army of rogues on your opponent while milling their deck to further charge up your rogues and enable Drown in the Loch to keep your opponent under control. This archetype is a fast and flexible aggro-control deck that can wrap up a game quickly and provide options to deal with your opponents’ plans.

Mono-Red Aggro
Another popular deck over the past year, mono-red aggro kills fast with the goal of getting under your opponents before they can establish their board. Flexible damage based removal and fast creatures topped off with the powerful Torbran, Thane of Red Fell and Embercleave can seal games before your opponents know what hit them.

Mono-Green Stompy
Mono-Green has proven to be able to go big and do it fast. Send monstrous creatures at your opponents while plowing through their defenses with Ram Through and Primal Might can leave an opponent simply unable to stop the onslaught. This deck also includes Garuck, Unleashed who can not only generate beasts himself but also help put the pressure on by giving your creatures a buff and trample.

Strixaven – the next Standard playable Magic expansion – takes on the magic school genre. Strixhaven is the most elite University in the Multiverse featuring five colleges which battle it out with their own takes on magic. Each one of the featured colleges represents one of Magic’s enemy color combinations with their own characters and mechanics.

A Mystical Archive card appears as a bonus card in each Draft Booster. These Mystical Archive cards don’t replace another card of the same rarity in a pack. So you can get multiple rare cards in a draft booster. In this set, Wizards of the Coasts has reprinted 63 of the most famous instants and sorceries of all time in specially designed showcase frames. Strixhaven Draft and Set Boosters contain one Mystical Archive card, and Collector Boosters have at least three. These will only be legal in formats that they are already legal in. They are not part of the Standard environment. However, the cards may be used in Limited events.

This standard playable Magic expansion will blend the world of Dungeons & Dragons with that of Magic the Gathering while using D&D’s Forgottten Realms campaign setting. Expect plenty of humans, dwarves, elves, goblins and orcs with cards tied closely to the D&D setting players have come to fondly.

Like Modern Horizons, this set introduces new cards into the Modern format while reprinting format staples.

Innistrad: Werewolves will be the 88th Magic expansion. It is expected to be released in Q4, 2021, and is paired up with Innistrad: Vampires.