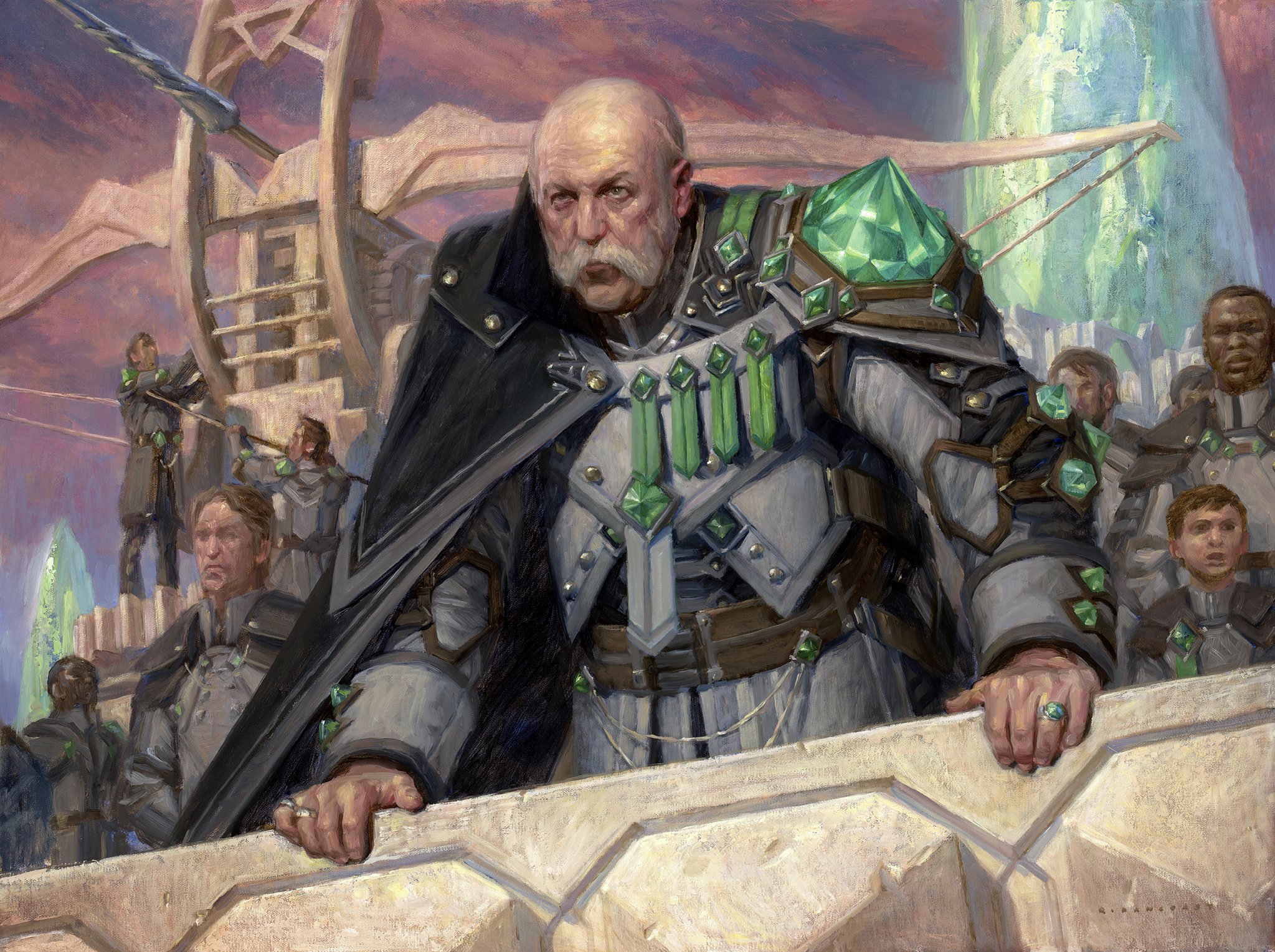 Ikoria’s paper release is just around the corner, but it’s digital counterpart is available for play and as a result I’ve had some time to play around with some of the cards. The mechanics of the set are interesting with plenty of though required when deck building. Human vs. Non-Human. The risk and reward of Mutate. The wedge colors that the set wants to play around. With some drafts, sealed and Brawl under my belt, I thought I’d list a few cards that I’m excited to try in the coming months.

This set gives Commander and Brawl players a feast of new toys to play with. There are plentiful commander options — with 22 legendary creatures and three Planeswalker commander options for Brawl. There’s some decent options for mana fixing and certainly plenty of interesting a fun new cards that go well into any deck.

My thoughts below are primarily Commander related though at times I’ll comment on my experiences with Brawl. It’s not in any particular order nor is it a definitive list of 10 “best”. It’s just 10 cards that I’m personally excited to try.

Before I get to that list of 10, I wanted to talk about the mutate mythics. I’m not 100% sold them. Illuna, Apex of Wishes, Nethroi, Apex of Death and Vadrok, Apex of Thunder are all pretty solid. The catch will be trying to get enough Mutate creatures to be able to successfully run these and get enough mutate triggers to make them worth it.  There are some additional mutate cards in the Enhanced Evolution commander deck — which itself is themed around the mutate mechanic — so I may be very wrong.

Nethroi may be the most appealing. The ability to return 10 power worth of creatures is one that you’re going to want to take advantage of and worth paying the 7 mana. In essence, you could easily find yourself with 15 power on the field for that cast.  If you have more mutate cards in hand, you can continue to trigger that ability. It’s certainly worth trying to build around.

Illuna is certainly tempting as well. Getting free spells on mutate is a huge boon and you may find yourself in the position to trigger the ability more than once. It could be a very entertaining commander to build around but without the access to black — a color that can help you return your mutate creatures from the graveyard — you could find yourself short on sources.

There are 17 cards with Mutate in Ikoria and 2 in Commander 2020 that can fit into the Illuna deck. There are 15 and 2 that fit into the Nethroi deck.  So it comes down to the question of weather or not 19 (or 17) mutate cards are enough. Probably. But even then the quality on these creatures varies.

In Brawl these both carry a much more significant punch but in a 60 card deck you can more easily hit critical mass and when limited to standard the individual cards stick out a little more.

I’d almost be more willing to try making a 5 colour deck with a commander like Golos, Ramos or Jegantha to provide me with a wider pool of mutate options and the ability to pick and chose the more potent cards.

The Ultimatum cycle is also something of a bit of hit or miss. Ultimatums have always been powerful if you can cast them, but I don’t know when I’ve seen one cast at a commander game. They have some pretty strict mana requirements that limit what decks you can put them in and can make them pretty difficult to cast even when you reach 7 mana. Of the lot, Ruinous Ultimatum is easily the best — a one-sided planar cleansing that will set everyone back. Eerie Ultimatum can pose a huge threat if your graveyard is full. The remainder go from lackluster (Genesis Ultimatum) to just awful (Inspired Ultimatum and Emergent Ultimatum). In the later cases, there are better cards for similar effects.

In Brawl, where stumbling in a 1-on-1 game can be more punishing, I haven’t seen these used often. I’ve seen one ultimatum cast in my dozens of games. In Commander, they may be a bit easier to cast but there’s also a much larger pool of cards that can replace them.

The cycle of Triome lands are obviously great, but there’s really not much else to say about them. If they fit your deck’s colors, you’ll want them.

An honorable mention goes to Winota, Joiner of Forces. While I was initially on the fence about Winota, having faced her in brawl a few times has me sold. A wonderfully aggressive commander, playing a few cheap early non-humans and then dropping her can have you swinging in for a ton of damage as she fetches up additional humans to join in combat. She doesn’t even need to attack for her ability to trigger. You can hold back and build up your board a little before playing her in order to reduce the risk of losing her before you can capitalize on her effect.

The issue is that multiplayer Commander doesn’t tend to be very hospitable to aggressive deck types. An early lead can make you a target and late game could find you in a spot where there are fewer occasions to attack profitably. She’s an absolute beast in Brawl though.

To start my list off with the real winners you need to look no further than the planeswalkers, Lukka and Vivian. Both give you some great value right away and can give you even more if they stick around.

Lukka’s -2 in the right deck can turn a mana dork into a dragon or an Eldrazi. In a pinch, the +1 ability gives you a bit of card advantage. You will likely never ultimate Lukka. You’ll likely want to use the -2 ability far more frequently and he will likely be taken down by your opponents pretty quickly.

Vivien can essentially double up the creatures you get when cast or flood the board with beasts. The fact she can give them reach can help ensure she stays protected and sticks around. Like Lukka, she can give you card advantage but in her case it’s the constant ability to look at the top card of your library and cast creatures from the top.

Both are also interesting Brawl commander options but also face heavy competition. Lukka works better than you might expect given the smaller pool of big bombs. Vivien provides you with decent value but again runs into a lot of competition with many other options for green creature heavy decks. As a commander, Narset probably shines a bit more than these two.

This guy provides you with some interesting board wipe protection and gives your non-flying creatures a second chance at life. It gives your bigger threats a bit of life insurance. It lends very well to sacrifice themed Orzhov decks (Black & White) allowing you to sacrifice your own creatures only to return them for added value. There are cetainly some additional combos you can accomplish if you can find ways to remove the flying ability and loop the effect.

It’s always nice to see the latest white hate bear and this guy can prevent all kinds of crazy plays by ensuring your opponents can only cast from their hands. Any deck that wants to cast cards from the graveyard (Muldrotha) will have a bit of a challenge to work through. The interesting addition is that this also prevents them from casting their commander. He won’t stay alive for long if your opponents can help it, but he may be able to buy you some time. If you can protect him in any way you can throw a wrench into your opponent’s plans for a good while.

The first uncommon on my list, Bastion of Remembrance gives you a body when you cast it AND provides you with a Blood Artist effect that can be even more difficult for your opponents to remove. As an added bonus, each opponent gets hit by the effect as opposed to Blood Artist requiring you to chose to target one. If your opponents play this card, you’ll want to be rid of it out of fear of what could come later.

Having played with Kinnan a fair bit in brawl, I’ve been sufficiently impressed by what this card can do. He’s cheap and easy to play and his ability — allowing non-land mana sources to produce an additional mana — can give you a significant edge. Before long, you will find yourself in a position to play huge spells well before your opponents can handle them. Kinnan’s activated ability lets you use that mana to search the top five cards in your library for a non-Human creature and put it directly into play. Your opponents may get wise to your tricks pretty early, but Kinnan’s low casting cost makes it easy to put him into play again and again, straining your opponent’s removal.

In Brawl, Kinnan is a beast. You can easily build a deck that can very quickly ramp into overwhelming spells. Even if Kinnan dies, the time and removal your opponents waste simply buys you more time to draw and cast those big spells — even without his help.

There are many, many ways to create tons of human tokens cheaply which will provide General Kudro with ample opportunity to clear a path as needed towards your opponents. His black and white colors lend very well to what General Kudro wants to do and there are many ways to not only fuel him and go wide with a human army but also to gain additional benefit from sacrificing your creatures. Cards like Grave Pact and Dictate of Erebos can force your opponents to sacrifice creatures when you do. Blood Artist (while not a human) and Bastion of Remembrance (which creates a human) can drain your enemies while you sacrifice your army.

Risen Reef is great, and Parcelbeast grants a very similar effect. You can mutate it into play early on and the effect can be repeated over and over without needing additional elementals to trigger it. You may want to use the mutate to cast it if only so you can be sure to get a chance to use it before it dies.

He’s not going to win you a game but he’s definitely a nice little value engine.

If you’re playing golgari, Fiend Artisan will make itself at home in your deck. Not only does it get huge as your graveyard fills with creatures, but it also allows you to tutor up creatures. Sacrifice tokens and smaller creatures to fetch bigger and bigger creatures while growing your Fiend Artisan. It’s like a mini Tarmogoyf-Birthing Pod. Not quite as powerful as either but given you a potent mix of abilities that anyone running black and green is going to want.

If you are playing five color decks, Jegantha will go nicely inside. He doesn’t even need to be your companion (but makes a great one if you can!). Keep in mind you can’t use the mana he provides for generic costs but he’ll certainly provide a boost that many five color ‘good stuff’ decks are going to want.

So there you have it. 10 cards I’m excited to try in Commander and a few honorable mentions. What are your favorites?