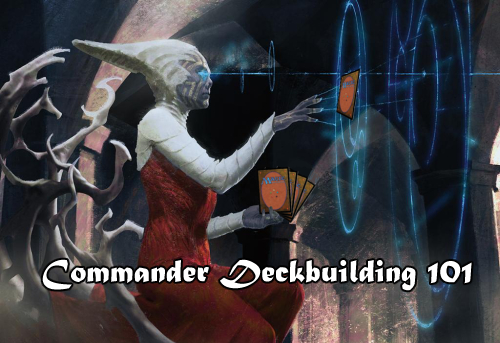 Commander is a fun and engaging format that players of all skill levels can enjoy. It can be played casually with a group of friends using your existing collection making it closest official format to kitchen table magic. It offers a large pool of cards, a fair bit of randomness and a low barrier for entry. Players only need a legendary creature and a deck of 99 cards that have that card’s color identity (they include only the colors of that creature and no others). Wizards of the Coast also releases new sets of Commander decks regularly making it even easier to get started.

Building your first Commander deck or modifying an existing deck can be intimidating for a new player and tricky for an old one.

Below are some things I’ve learned over the years when it comes to deck building. There will be a future article around actual play.

It can be really difficult to find the correct balance of land in a Commander deck and it can differ between decks based on the number of ramp spells and mana rocks your deck has and how mana hungry your deck is. Typical magic decks have about 40% land and in Commander, hitting land drops for your first five turns is important. With that said, with enough alternative mana sources like mana rocks, you can cut down your land a bit. One rule of thumb I saw noted was cutting 1 land per every three sources of ramp.

You’ll also want to look at utility lands. Even in a mono-colour deck, you will still want to consider some utility lands. Lands that deal with other lands, lands that cycle (in case you have too many lands), lands that can get you card draw or life, lands that remove creatures from combat or lands that can return cards from your graveyard. There are plenty of options to consider beyond the basics. Just remember to include some basics though so that cards like Evolving Wilds can find targets.

When I started tuning the early precons I had purchased back in 2013, one of the cards that I ended up cutting frequently were the signets. Commander was a lengthy game right? I thought to myself that I couldn’t possibly need the little mana boost and could easily cut those signets in exchange for creatures and spells.

Boy, was I wrong.

Mana rocks and ramp are a necessity. Commander lets you play big spells but you need the mana base to support it. You’ll also need the extra mana for your commander should it die a few times too many. Sitting around for multiple turns saying “land, go” and doing nothing else isn’t going to be terribly enjoyable and leaves you fairly open.

I first noticed this when playing one of the more experienced players in our playgroup. He always seemed to have at least one and sometimes more sources of ramp to use early game, meaning he had more mana available to play out his commander fairly quickly and get his gameplan underway.

Many of the pre-constructed decks come with 40 or more mana, a signet or two and a sol-ring. You can easily add extra sources of ramp and cut a few lands allowing you to play your big cards more quickly while reducing the number of turns you’ll be stuck with just land to play.

There is no hard and fast rule, however, as the speed of your playgroup and your deck’s needs can have an impact on how critical your mana and ramp are. Board wipes can also be something to consider. A deep investment in mana artifacts can leave you prone to a huge setback if someone destroys them.

Can You Win Without Your Commander?

Your commander will die. He will get stolen. He will get enchanted with spells that turn him into a frog, a stag or a tree.

If that happens, what is your plan?

If your entire gameplan relies on your commander being in play, you will find yourself in rough shape if anything should happen to them. Make sure your deck can function on some level without your commander.

Think about what your deck needs to win. If you are playing controlling decks or group hug decks, it can be easy to forget how you will close out the game in your favor.

Never think that your opponents won’t interact with your win conditions or your combos. They will. And have a backup plan if they do.

Despite my own love for long, drawn out games it is not always bad to get a couple of combo pieces going so you can close out a game. Out of the blue wins can feel bad sometimes — both for the winner and the opponents — but don’t be afraid to do it from time to time. Have the conversation up front with your playgroup, however, as some are more sensitive to combos than others. There is a huge difference between Casual and Competitive EDH and you’ll need to judge how you build your deck and what combos you rely on accordingly.

Sometimes though, you need a win condition and there are times when a game just needs to end.

Keep in mind that if players start seeing your combos coming, you’ll catch heat fast. If you play them all the time, you’ll have a target on your back.

It can be really easy for a new player to get super focused on putting things on the board without thinking about how they are going to deal with their opponent’s board. You are not playing in a vacuum — you are playing against multiple opponents and you need to ensure that they don’t get to their win conditions before you do. The two best ways to do that are countering their spells and removing their board.

If you are running blue, there’s no reason not to have at least a few counter spells on hand.

You’ll also want to have a few board wipes. If your opponents have way more creatures than you do and are just too far ahead, a board wipe like a Wrath of God can really help reset everything.

Creatures aren’t the only way to win — artifacts, planeswalkers and enchantments can be problematic as well. You’ll want to think about how your deck will deal with them too.

Board wipes are a fantastic way to get rid of multiple targets at once and give you card advantage over spot removal that targets just one thing. That said, there are times when you will just want to remove a single problem. You don’t want to lose your entire board if there’s only a single creature, artifact or enchantment causing everyone grief.

Another thing to consider is exile effects. Creatures that are indestructible do appear from time to time and exiling them is one sure way to be rid of them. Exile effects also prevent players from returning cards from their graveyard. Theros: Beyond Death, for instance, introduced the Escape mechanic that allows you to cast spells from the graveyard. You can get around that by simply exiling the creature so it never hits the graveyard.

Nothing feels worse than having nothing in play and only a single card in your hand while your opponents sit with full mitts of 7 cards. When building your deck, you need to think about how you will maintain some degree of card advantage. Drawing cards is extremely important in magic. It gives you options and it gives you answers.

Some colors are significantly better than others at drawing cards. Blue is above and beyond the easiest color to play when trying to keep your hands overflowing with options. Black and green aren’t slouches either.

Then we get to white and red. White in particular has a very difficult time keeping the cards flowing. You’ll want to look closely at the few options available, see if they will fit your deck and fill in gaps with colorless sources of card draw.

Cards that let you find specific cards in your deck are very helpful. Tutors come in a number of varieties with the bulk of them found in black. You can also find creatures with tutoring abilities, so keep an eye open.

Sometimes the only thing better than drawing multiple cards is drawing one of the exact card you needed.

Be Aware of the Graveyard

For some decks, the graveyard is as good as having a second hand of cards and can be just as good as drawing cards form their deck. They will reanimate, recur, recast and recycle anything that has managed to die, get milled or get discarded. They may have spells or creatures that get more powerful depending on what is in their graveyard or yours. They can even steal or reanimate things form other player’s graveyards.

In short, when deck building, you want to think about the graveyard. How can you use it to your advantage and how can you prevent your opponents from using it to their advantage.

If you can find ways to bring back cards form your graveyard — either to your hand or to play — it will give you a lot more options later in the game. You will have more to work with than just the cards in your hand. This can be the difference between stalling out and having at least some plans and strategies you can act on.

Of course, you want to have something in your deck to prevent your opponents from doing the same. There are plenty of cards that will exile graveyards, shuffle them back into libraries or simply preventing players from using them. Keep those in mind — particularly if your playgroup is fond of “recycling”.

It can be very important to think about what your opponents could do that you will not be able to easily address and then find ways to address them. If your deck relies on specific cards or mechanics (enter the battle field triggers, reanimation, card draw) what might happen to sabotage you? What are some strategies your opponents might use that you might not be able to deal with?

Also consider that each color has specific weaknesses you need to take into consideration — red, for instance, has difficulty dealing with enchantments. White has struggles with ramp and card draw.

If your deck uses enter the battlefield abilities a lot, what will you do if they get silenced (like through a Torpor Orb). If you are playing red, how will you deal with problematic enchantments? You may run into scenarios that completely shut down your deck. You’ll have to think about how to deal with them.

Things to Avoid For Casual Play

There are a few things that are worth noting if you are specifically building a deck for casual play:

Decks that lock down the board are generally frowned upon. These decks grind games to a halt and generally lead to games where no one can interact or even play. They lead to frustration and are generally not much fun for anyone involved.

Decks that require lengthy turns due to heavy amounts of upkeep or a lot of board state management can be a challenge for everyone. Your opponents are forced to wait while you sit and try to resolve all of your triggers and available actions. This is something for superfriends decks — which play a heavy amount of planeswalkers — need to consider too as managing planeswalker loyalty abilities can be a headache.

Land destruction and heavy board wipes are also frown upon. Land destruction in particular is best done only when you know you can seal your victory — otherwise they can draw out the game unnecessarily. Blowing up the board “because you can” is also just going to lead to drawn out games that become exhaustive instead of fun.